Denver’s new International Church of Cannabis is learning it will have to observe some traditional practices.

The church that opened April 20 in a historic building at 400 S. Logan St. claims cannabis as its primary sacrament, eschews divine law and rejects all authoritarian structure.

But church leaders now know there is one authoritarian structure they can’t avoid: the West Washington Park Neighborhood Association, and one aspect that can’t be overlooked is a church’s prominent place within a community.

Founding church member and building owner Steve Berke addressed concerned neighbors for the first time Saturday afternoon at a hastily arranged meeting of the association’s zoning committee that drew a standing-room only crowd to the Washington Street Community Center.

Discussions about the religious beliefs of the self-proclaimed Elevationists who attend the church and marijuana use at the building were off limits, Gertie Grant, the neighborhood association zoning committee chairwoman, told attendees. Likewise, there was no action to be taken by the committee because no permits or permissions were required for the church to continue its operations.

Instead, she explained, the meeting was called to allow church leaders to present their plan for the building and to take questions from neighbors – something that usually occurs well in advance of an enterprise or development opening within the association’s boundaries.

“Things go more smoothly if there is an introductory meeting with the neighbors,” Grant said, “and this did not happen here.”

Neighbors stuck to the ground rules for the most part, peppering Berke with questions that would have been asked of other churches opening in the neighborhood. Parking, traffic, noise and maximum-occupancy concerns dominated the Q&A session. Other issues raised, including odor mitigation and the secrecy with which the facility opened, were unique to the International Church of Cannabis.

Parking and increased traffic were the primary issues raised by the building’s immediate neighbors.

“I refuse to accept that parking is an issue around the church,” Berke said.

He repeatedly told meeting attendees that the church had no plan for parking because more than 1,000 spaces are available within a six-block radius of the church. Furthermore, he said, Elevationists are forbidden from driving to cannabis-consumption events. If parking does become a problem, he reasoned, the church would arrange for valet service or rent an off-site parking lot.

“If we were any other church would you be complaining?” he asked one resident of Pennsylvania Street who had inquired about parking.

“I complained about it with the previous tenants too,” she retorted.

Neighbor and past WWPNA president Charlie Busch said Berke was being overly defensive and she pointed out that parking and traffic issues caused by churches were often addressed by the zoning committee.

The neighborhood association had previously addressed concerns raised about Denver Community Church at 1101 S. Washington St., Busch said. She also recounted the story of how her own church, Epiphany Lutheran at 790 S. Corona St., had to scuttle plans for a preschool because a neighbor objected to the additional traffic a facility for no more than 30 children would bring to the block.

“People may be weirded out because your church is different, but these are zoning issues we talk about all the time with other churches,” she said.

When asked about noise mitigation efforts, Berke said the group had done testing of up to 125 decibels inside the sanctuary without violating city ordinances.

“Sound doesn’t penetrate the historic building’s stone walls,” he said, “and if it does, let me know.”

He also asserted, without evidence, that neighbors had phoned in bogus noise complaints against the church.

The Denver Department of Environmental Health appears to be taking neighbor noise complaints seriously, however. In an April 25 letter obtained by The Cannabist, the agency warned the church that multiple noise complaints had been received over the course of its three-day opening event starting April 20. The letter advises the church that if additional complaints are received, the agency or police may conduct monitoring.

“If a violation is documented enforcement action will be taken,” the letter concludes.

“Sky is the limit” for church membership

In answering other questions, Berke revealed the four-week-old church had just over 1,000 members, approximately 350 of whom reside in city council District 7 that is home to the church. Membership is free to adults who register on the church’s website, he said.

The 13,000-square-foot facility’s maximum occupancy is 530, he told the assembly, with a maximum of 280 people allowed in the sanctuary, the only room in which cannabis consumption is permitted. Berke said because the church planned to broadcast its events and services on the internet it had already begun to attract an international membership.

“The sky is the limit,” he said of potential membership numbers.

Cannabis-consumption events are limited to invitation-only private and restricted events, he told the meeting attendees. Currently, the only consumption events scheduled are weekly services held Friday from 6-10 p.m. Services held on the first two Fridays in May were attended by 30 to 35 people.

Berke was also asked how the church intended to mitigate the odor of marijuana and whether or not it intended to abide by the Colorado Clean Indoor Air Act forbidding smoking.

The church has installed “thousands of dollars” worth of air filters in the sanctuary, he said. Likewise, the church is exempt from the state statute forbidding indoor smoking because it employs no more than three people. The church will maintain its exemption by relying on volunteers to organize and run events and maintain the facility, he said.

Among the most pressing questions from neighbors and zoning chair Grant, was why the church had failed to reach out to the community prior to its April 20 opening.

Berke blamed unforeseen media attention, and told the meeting that the church had to speed up its opening by six weeks because The Denver Post and its marijuana-focused website The Cannabist were preparing a story about the church in early April.

“It wasn’t kept a secret, but we weren’t broadcasting our opening either,” he said.

The Cannabist first contacted Berke about the church on April 5. At that time, The International Church of Cannabis appeared in a Google search of the property’s address. Likewise, at that time Berke’s Twitter account showed he was actively reaching out to comedians to perform at the opening of the church on April 20, the unofficial annual marijuana holiday. Berke’s publicly traded company, Bang Digital Media, also issued a press release on March 22 touting a $250,000 marketing contract with an undisclosed “Colorado-based cannabis company” slated to launch in April 2017. Subsequent reporting by The Cannabist showed that undisclosed entity to be Elevation Ministries, the religious nonprofit running The International Church of Cannabis.

The following week, The Cannabist was granted access to the church and an interview with Berke; the story published online April 12.

If the meeting’s intent was to smooth out the relationship between the church and the West Washington Park neighborhood, tensions remained.

Neighbors left the hall grousing that their primary concerns had hardly been addressed.

“This isn’t about religious freedoms; our concern is quality of life on our block,” said neighbor John Conti after the meeting. “The devil is in the details – and we didn’t get any today.”

Berke asserted his church was under attack and wrapped the meeting with the threat of lawsuits.

“If this were a Baptist or Methodist church, or a synagogue, I wouldn’t be standing here,” Berke said. “I’m standing here because our church has cannabis in its name.”

If anybody questions the validity of the Elevationists’ religion, the International Church of Cannabis would sue for defamation, libel or slander, he said.

“We have a First Amendment right to practice our religion within our church and our walls,” he said. “If you question that, we reserve the right to take you to court.” 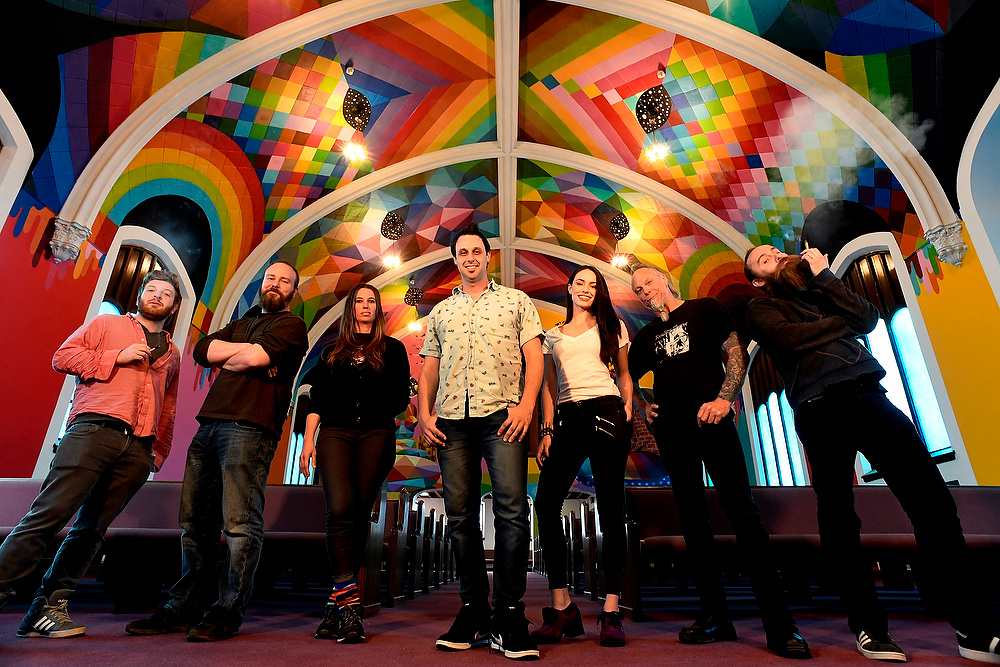 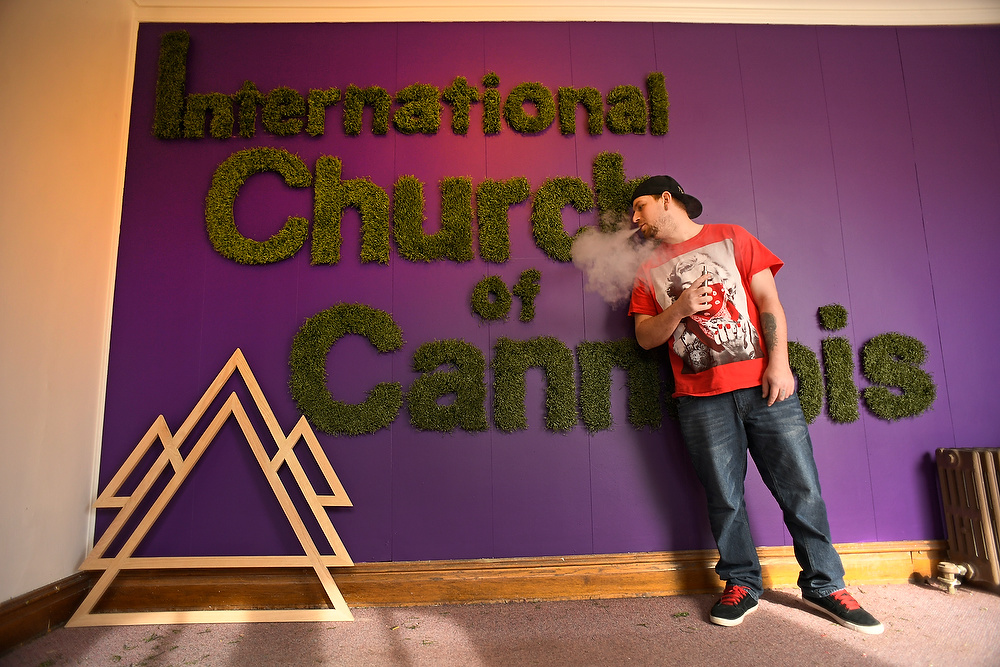 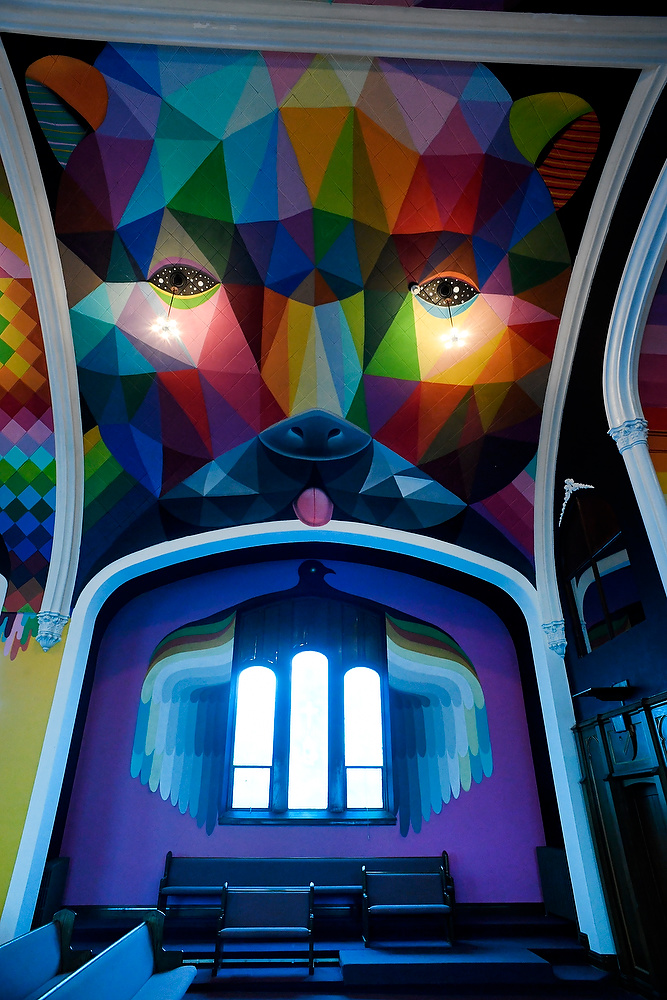 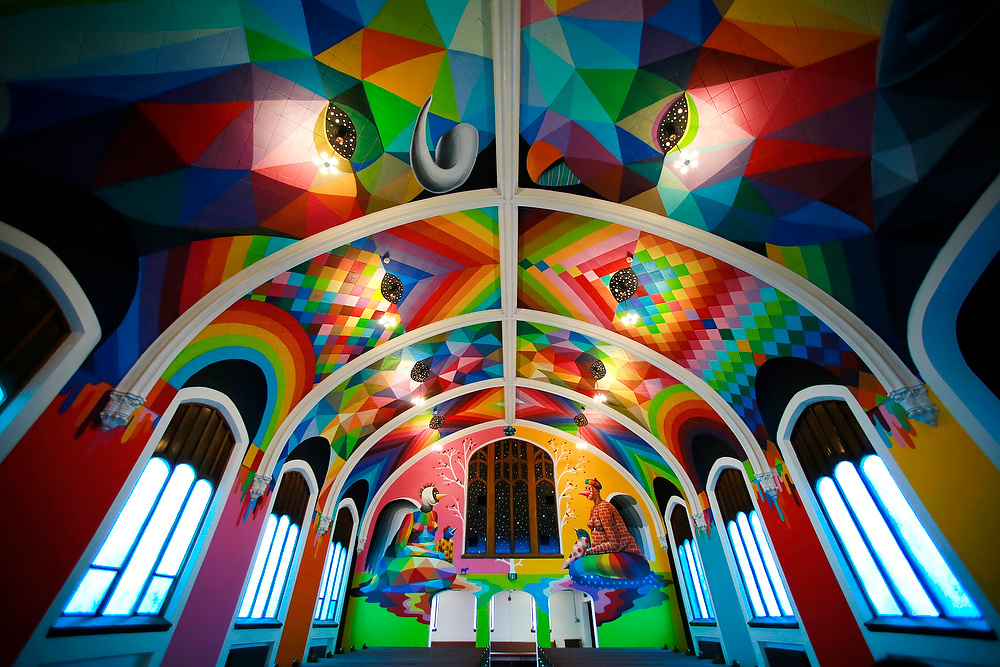 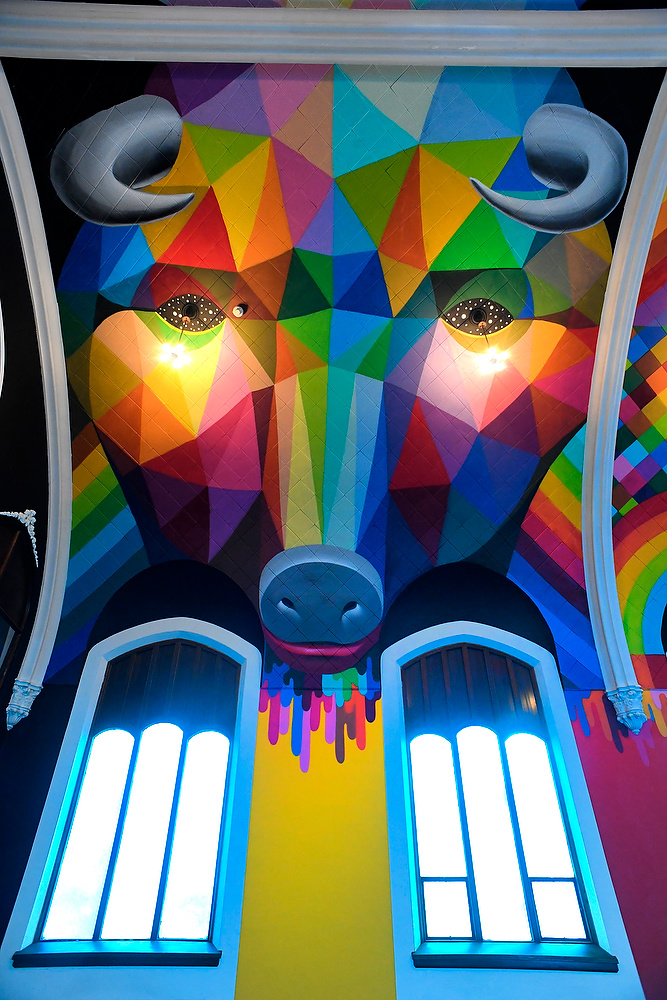 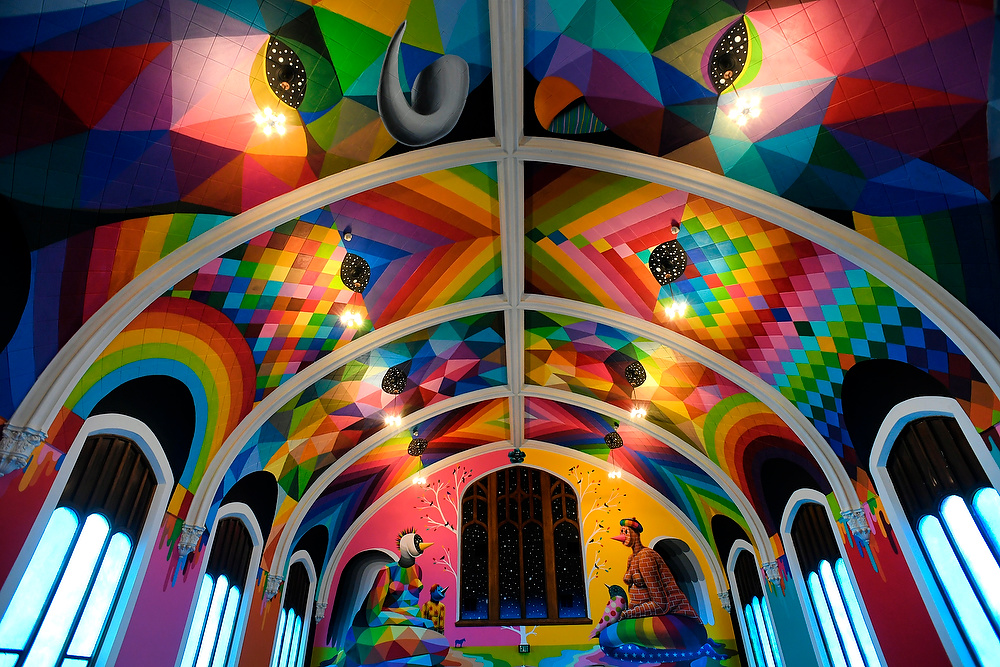 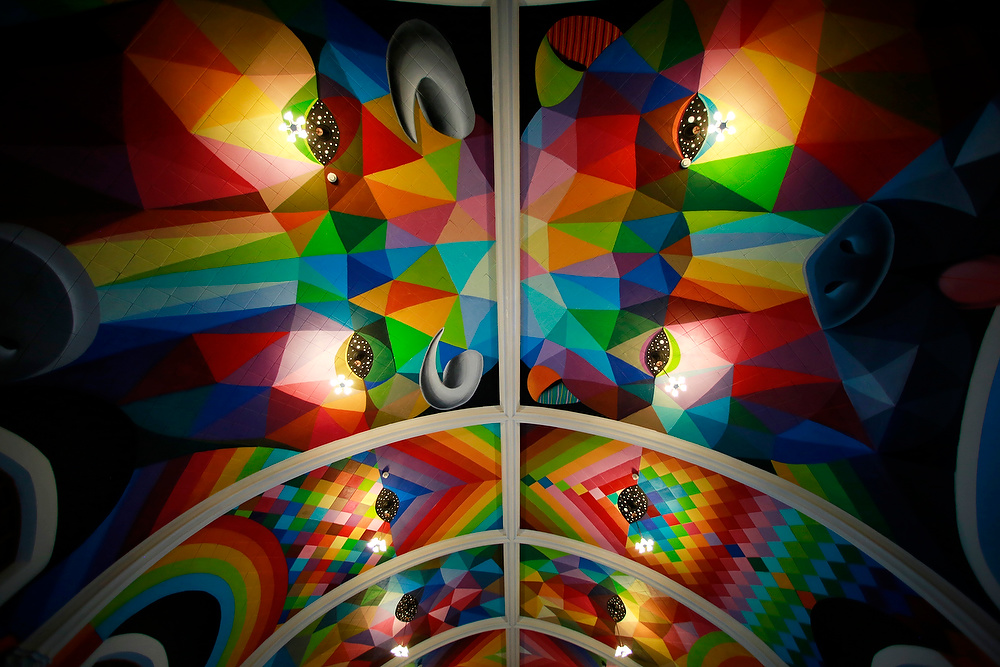 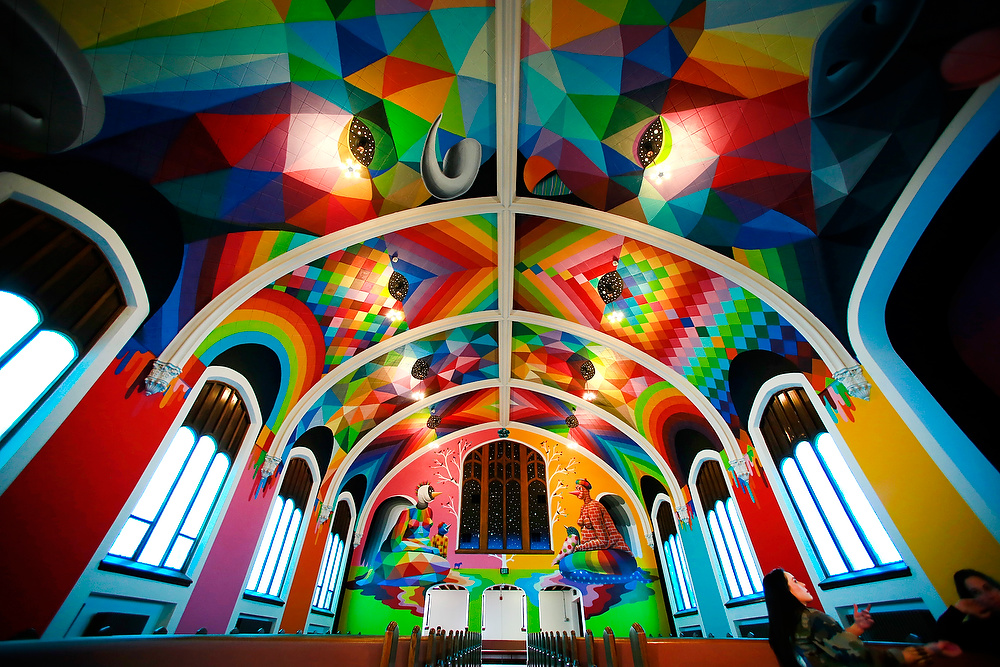