While the institution of marriage may remain a topic of debate, there’s no argument that weddings are big business.

According to data published last June by business research group IBISWorld, the U.S. wedding industry brings in around $72 billion in revenue annually, and grew by more than three percent between 2011 and 2016 as the economy recovered from recession.

Legal marijuana companies, including cannabis-focused caterers, photographers and limo services are already breaking into that lucrative wedding services sector, as was highlighted at the second annual Cannabis Wedding Expo in suburban Denver this past weekend. Additional expos are on tap this spring for couples in other legalized Western states.

People who showcased their cannabis wedding services at the Expo say they are seeing a steadily rising demand for their services.

“I’ve done probably about 25 cannabis weddings in the past year,” says Talie Ayers, a hair and makeup stylist who has been working weddings since 2003. Ayers says she enjoys the laid-back atmosphere usually found at most cannabis-themed weddings, as well as the creative ways those weddings use cannabis plants.

“There’s always flowers involved and flower crowns and things like that,” she says. She likes collaborating with budtenders hired for the event, to pick out buds of different colors to work into a hairstyle.

At the Expo, several hundred people circulated between four large, brightly-lit rooms, sampling foods and beverages while talking with vendors representing wedding planners, caterers, florists, bakeries, photographers and other businesses illustrating the new ways that couples can celebrate their new lives together by incorporating marijuana into their nuptials.

“They’re really perfecting this market, these services,” says Jordan Person about her fellow vendors at the Expo. Person is the founder of Primal Therapeutics, a cannabis-infused massage therapy company. The company offers massages with oils and salves containing THC and CBD “for the most therapeutic effect,” and her staff travels to homes, hotels and businesses throughout the state. She’s finding a growing business in helping to massage away pre-wedding jitters for brides and grooms, as well as their friends, family members and wedding attendants.

“It’s an incredible way to incorporate cannabis into your big day without making people high,” she says. “It’s been very open because this is such a new market; it’s such a niche market.”

Person notes she hasn’t seen any push-back from her wedding clients who have been surprised with the gift of a cannabis rub-down.

“They say, ‘What? You do what!? You’re going to do what to me? I thought I was just here to get ready!'” she laughs. “So it’s an amazing feeling to make them feel even more excited. It surprises me when people still say, all the time, ‘I didn’t know you could do that.'”

Like Person, cannabis wedding planners strive to make sure everyone feels comfortable at the event.

“There’s many ways not to piss off grandma, as I like to say,” says Bec Koop, the Cannabis Wedding Expo’s co-founder and COO. Koop has been working “in the wedding world” since 2011 and has run her own cannabis wedding and events business for the past several years.

“When we know that there are some guests who might not be totally comfortable with it, we try to find different ways to create more comfort level,” she says. “Whether that’s doing the party bus so there’s not even any smell or exposure, or simply something like putting a joint or edible into a party bag that people get on their way out. So there’s different ways to incorporate cannabis without offending.” 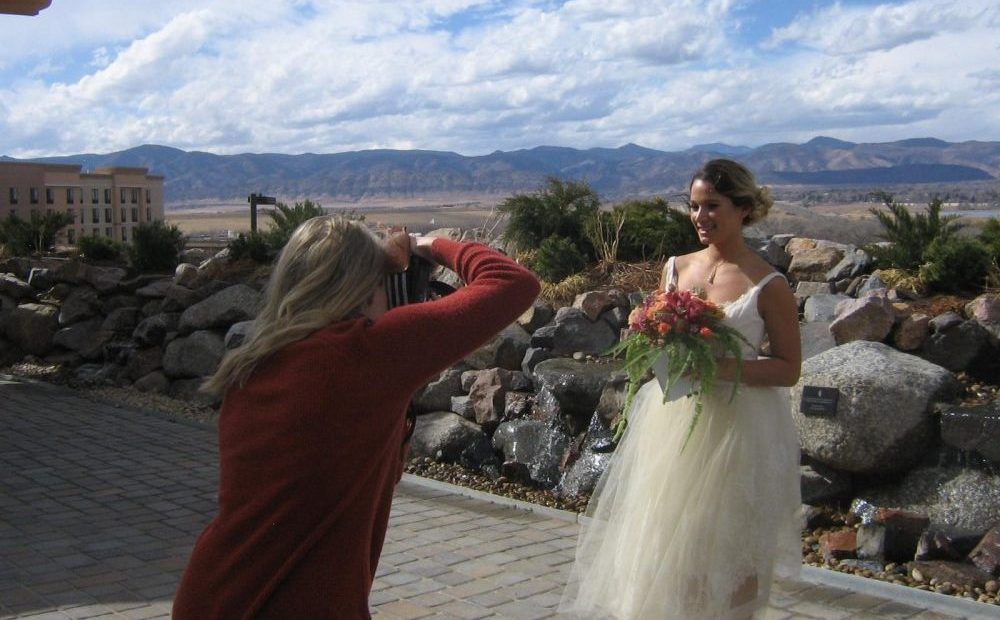 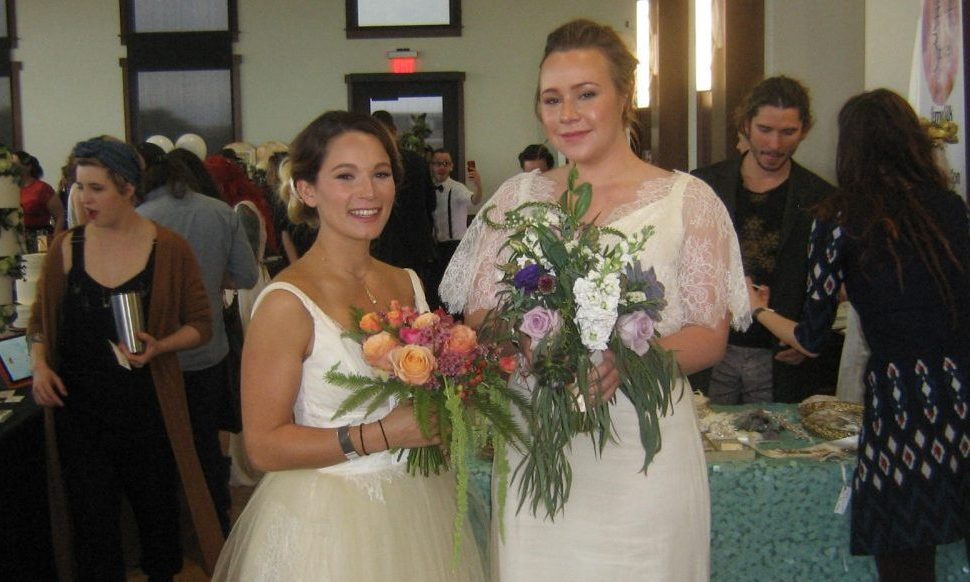 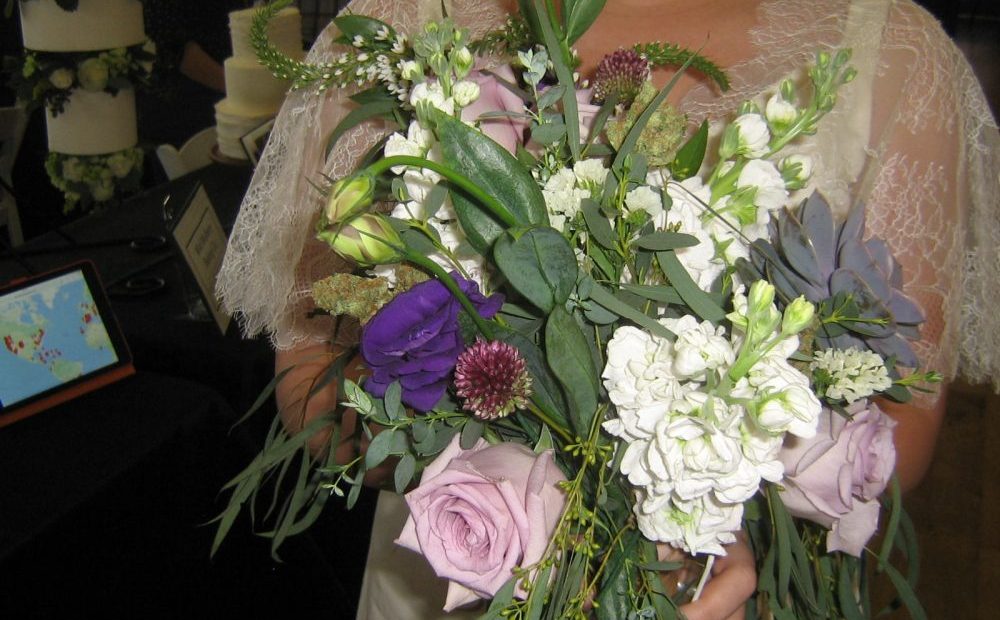 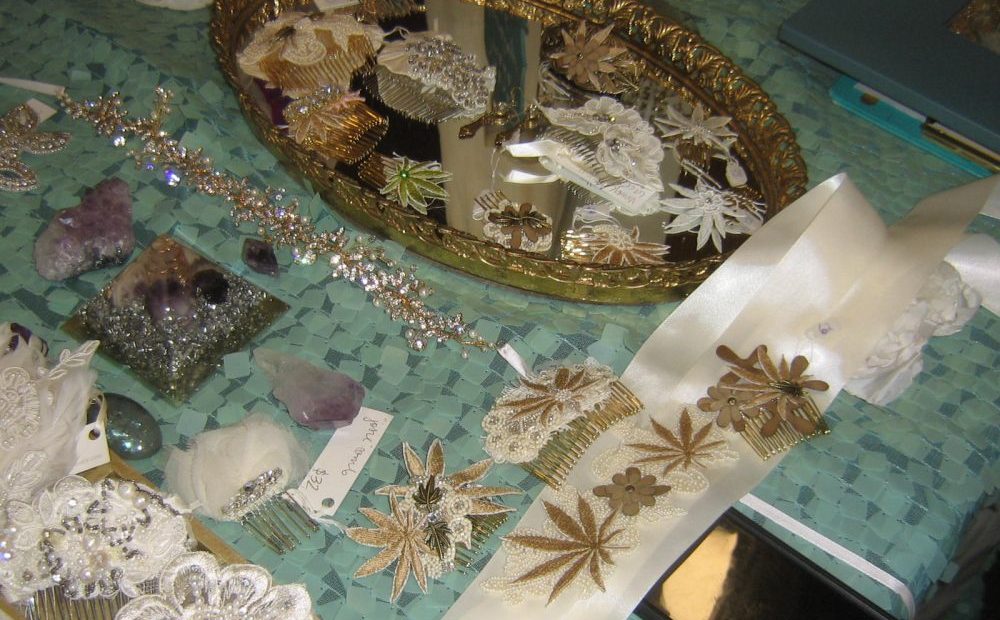 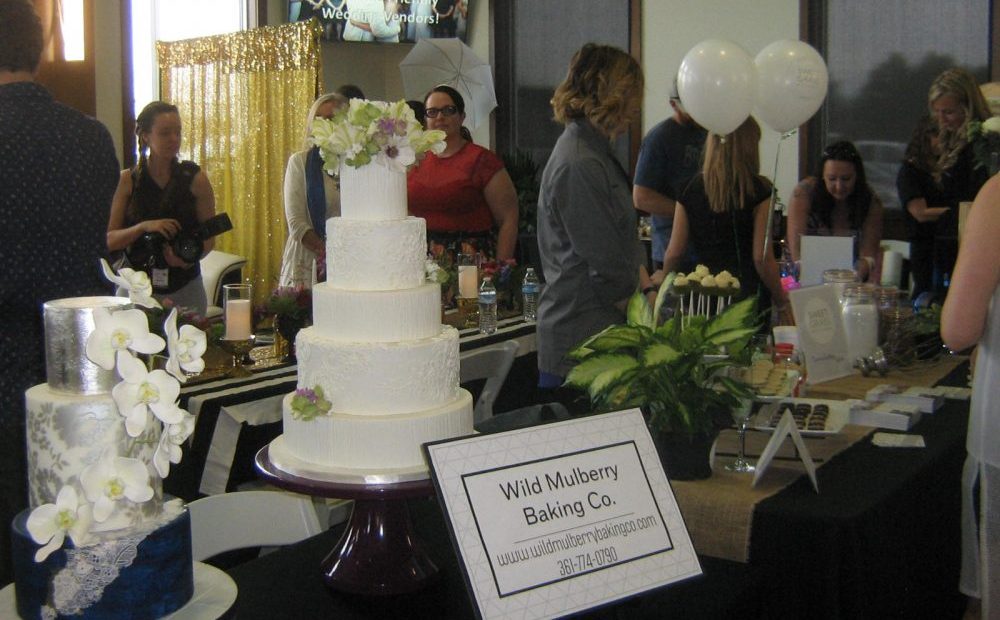 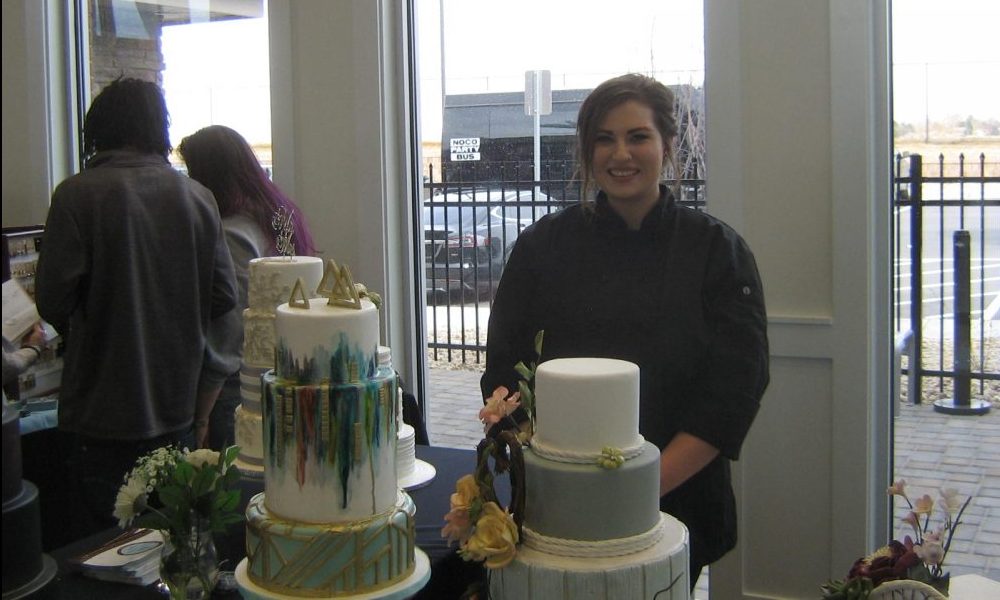 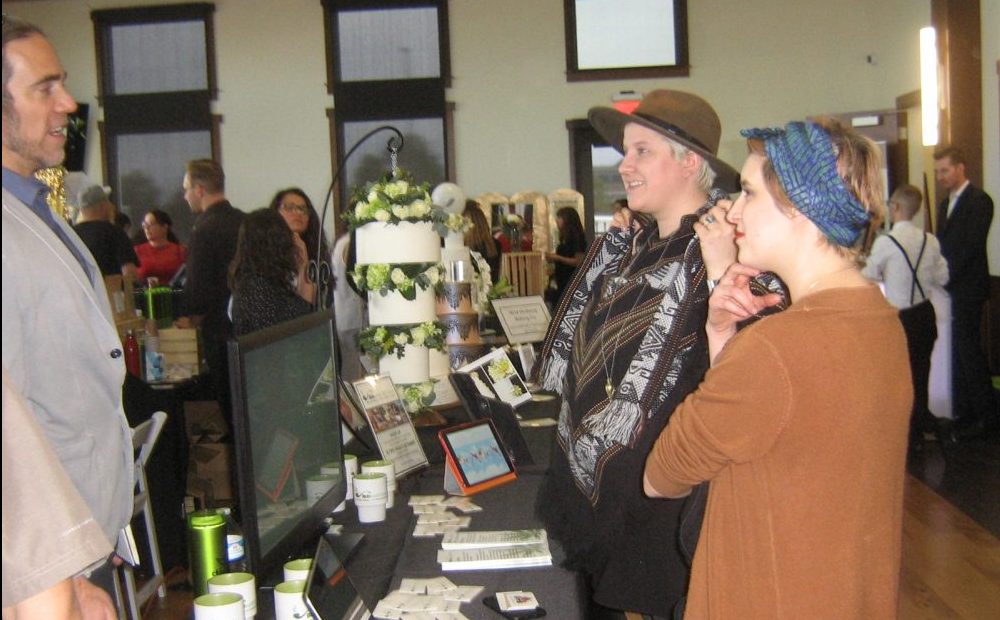 Every wedding is unique, and people involved in cannabis-themed weddings say their events allow for plenty of unique moments. Some couples, for example, like to incorporate marijuana into their marriage vows.

“We actually did one (wedding) with a medicine pipe theme to it, where they shared the pipe back and forth during the vows,” says Kris Bowen. She and her husband Ken are ordained ministers who have been officiating at cannabis weddings ever since recreational marijuana sales started in Colorado in early 2014.

The Bowens say their weddings involve people from all income brackets and walks of life.

“You’d be surprised,” says Ken. “It’s not just hippy-trippy tree huggers anymore. As the culture has shifted, you’ll find that more and more people that weren’t necessarily accepting of it — or one of the main reasons that they weren’t accepting was because of legal issues — are now finding out that, wow, this isn’t such a bad thing. This isn’t the demon weed. This is something that anybody can enjoy and partake of without having some stigma attached to it.”

The biggest difference between a standard and a cannabis wedding, according to Koop, is the educational factor.

“We’re teaching people all about cannabis and about the different ways to enjoy it and experience it, and to have the expected outcomes come true,” she says, “so that we can break the stigmas and fears of people who are afraid of trying cannabis.”

Cannabis Wedding Expo co-founder and CEO Philip Wolf also notes the importance of keeping cannabis out of the hands of children at these events, by keeping all marijuana products under strict adult supervision.

Koop and Wolf are also trying to educate their industry as to its own size and scope. They will be holding similar events for the first time in Portland, Oregon on March 26 and San Francisco on April 30. They are planning to track cannabis wedding sales with their vendors, to help gauge the sector’s growth and determine which services are most in demand.

“We don’t have some true figures right now but I can tell you that my business has grown exponentially since we started,” says Koop, who already has a dozen cannabis-themed weddings scheduled for this summer. “It’s getting much busier; the demand is getting higher. It’s also a lot of fun to create a beautiful strain menu and educate the clients about the different cannabis strains, and to really teach them all about cannabis.”

Other visitors to the Expo of course were those who are preparing for their own weddings. Among those was Michelle Madrigal, who works for a Denver-based cannabis industry software company and is getting married in May.

“I’m having a cannabis-themed wedding because I want to get away from that stigma of a wedding that has to (have) alcohol, and everybody has to be hammered to have a good time,” she says. “So I want to give my guests the choice of, if they don’t want to drink, a responsible way to consume and not have to worry about anything.”

Madrigal is planning on having cannabis-infused cupcakes “instead of a whole cake” at her wedding, and is considering some other options like a cannabis-infused salad. The cannabis industry, she says, is “not as big and loud as everybody thinks. It’s not as in-your-face as it once was, now that it’s getting more organized. I think the taboo is going away and (cannabis) will be like anything else you shop for.”

Adding bud on a budget

Madrigal says she found the prices offered by the Cannabis Wedding Expo vendors to be comparable to those listed by mainstream wedding services. Though a modern full-scale wedding, as anyone who has planned one can tell you, is not cheap. A survey published earlier this month by The Lilybridal found that the average cost for a wedding in 2016, not including the honeymoon, reached an all-time high at $35,329. At the same time, the number of guests attending a wedding has gone down, meaning that spending per guest has increased.

“You still get all ranges, but the ironic part is we get a lot of renewed vows,” says Koop. “We get a lot of elopements. But then you’re getting a lot more intimate weddings right now. As the trend becomes more accepted it’s going to turn into this larger-scale operation. You don’t have as many of the much larger weddings, but they’re coming down the line. I just got contacted for a 300-plus person wedding here this summer that wants it totally cannabis-friendly and they want to educate every single one of their folks about cannabis.”

Backyard weddings with cannabis themes are also becoming more popular, so it appears that cannabis-themed weddings are not all that different from their traditional counterparts. But Koop has some tips for those considering a marijuana-infused event.

“Talk to a professional,” she says, “because you don’t want to get into a position where you’ve booked the wrong venue and the policies aren’t accommodating to what your cannabis preferences are for your big day.”

Doing your research and asking questions, she adds, are important as well, “to make sure that you’re doing things legally and in a tasteful way; that’s going to be the most ideal (wedding) for all your people involved.”