PALM DESERT, Calif. — Jim Bridwell, a hard-partying hippie and legendary climber who lived his life vertically on some of the toughest peaks in Yosemite National Park, has died. He was 73.

Bridwell died Friday morning at a hospital. He had liver and kidney failure from hepatitis C that he may have contracted in the 1980s when he got a tattoo from a headhunting tribe in Borneo, his wife, Peggy Bridwell of Palm Desert, told The Associated Press on Saturday.

The flamboyant Bridwell was idolized by some and labelled reckless by others, but no one disputed his sheer skill on a rock face.

He made some 100 first ascents in the California park and on peaks in Alaska and the Andes. In 1975, Bridwell, John Long and Billy Westbay became the first climbers to ascend a route called The Nose on Yosemite’s 3,000-foot El Capitan in a single day. A previous climbing team had needed seven days. A photograph of them afterward with Bridwell shirtless in a psychedelic vest and smoking a cigarette became famous.

While he may have been viewed as reckless, Bridwell also helped establish the first formal Yosemite search-and-rescue team, pioneered rescue techniques and invented climbing gear.

Fellow climber Dean Fidelman, 62, told the San Francisco Chronicle how Bridwell was the person you would go to if you got into trouble on a climb.

“He was the kind of guy who brought out the best of you… but he was also a child of the ’60s, a hard drinking guy, who took acid trips as part of his journey and smoked unfiltered Camels almost until the end of his life,”

Fidelman said. “He lived life with a lot of passion.”

Bridwell, who loved birds of prey and was nicknamed “the Bird,” began climbing in the 1960s. In the 1970s, he was part of an outlaw group of Yosemite climbers who took on the hardest, steepest and most dangerous pitches, using minimal gear and aiming for style, precision and speed.

The Stonemasters lived hand-to-mouth in campgrounds, playing music, drinking and smoking marijuana. By some accounts, they managed to recover pounds of marijuana from a smuggling plane that crashed in the park in 1977 with 6,000 pounds of pot aboard. 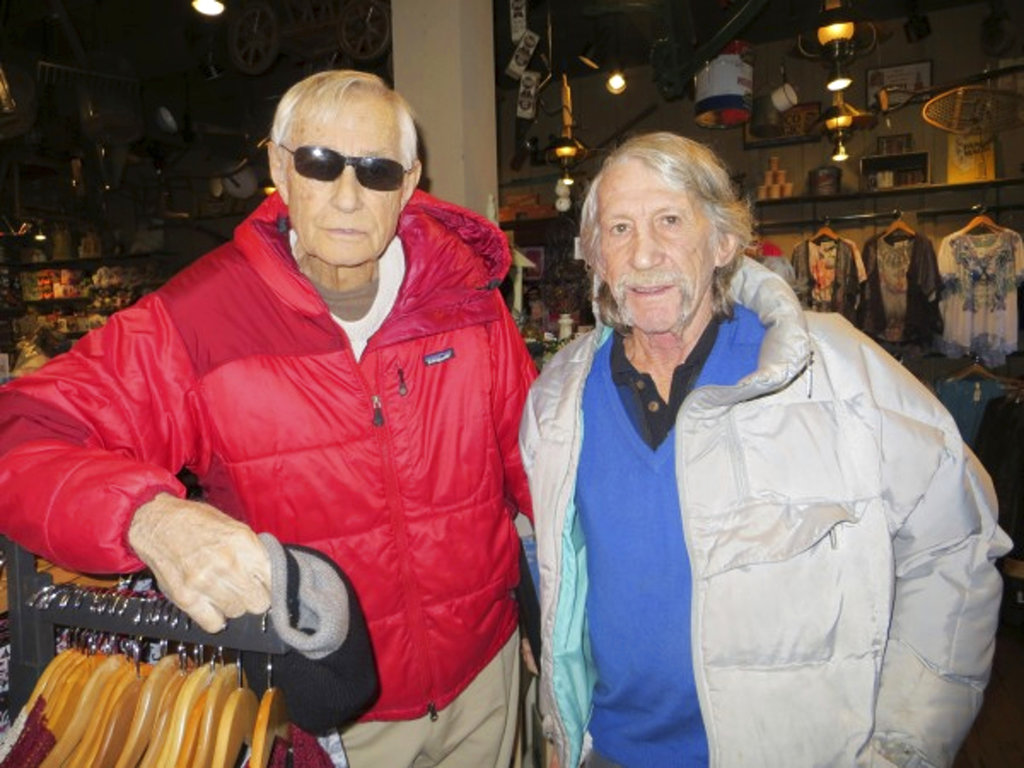 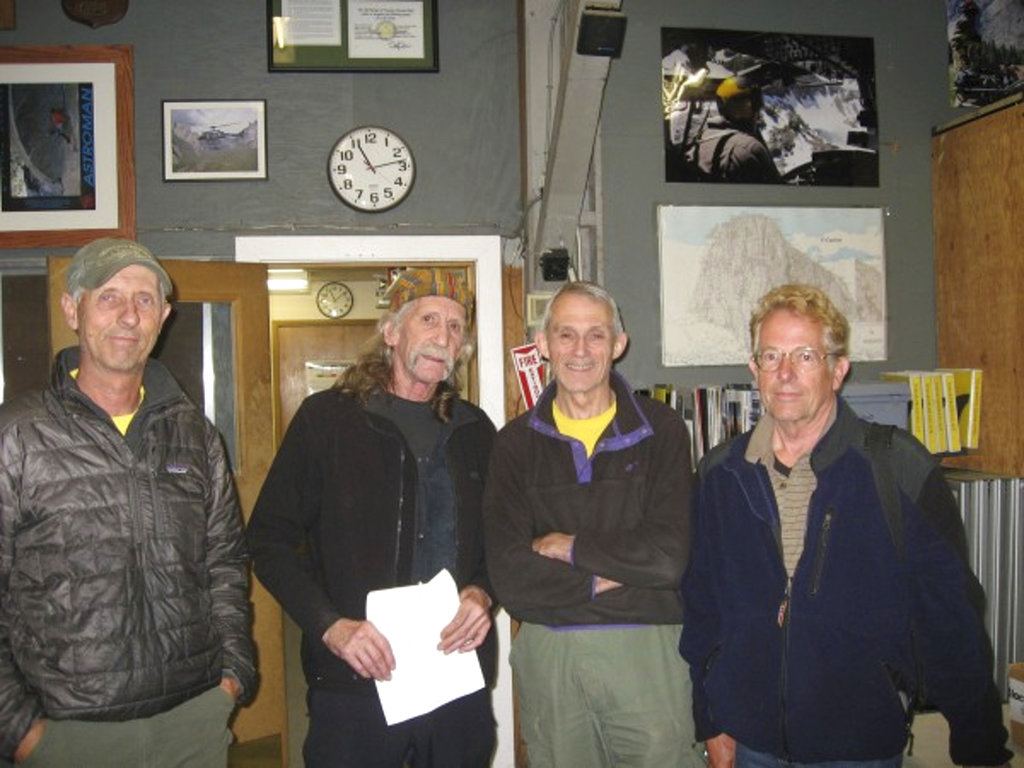 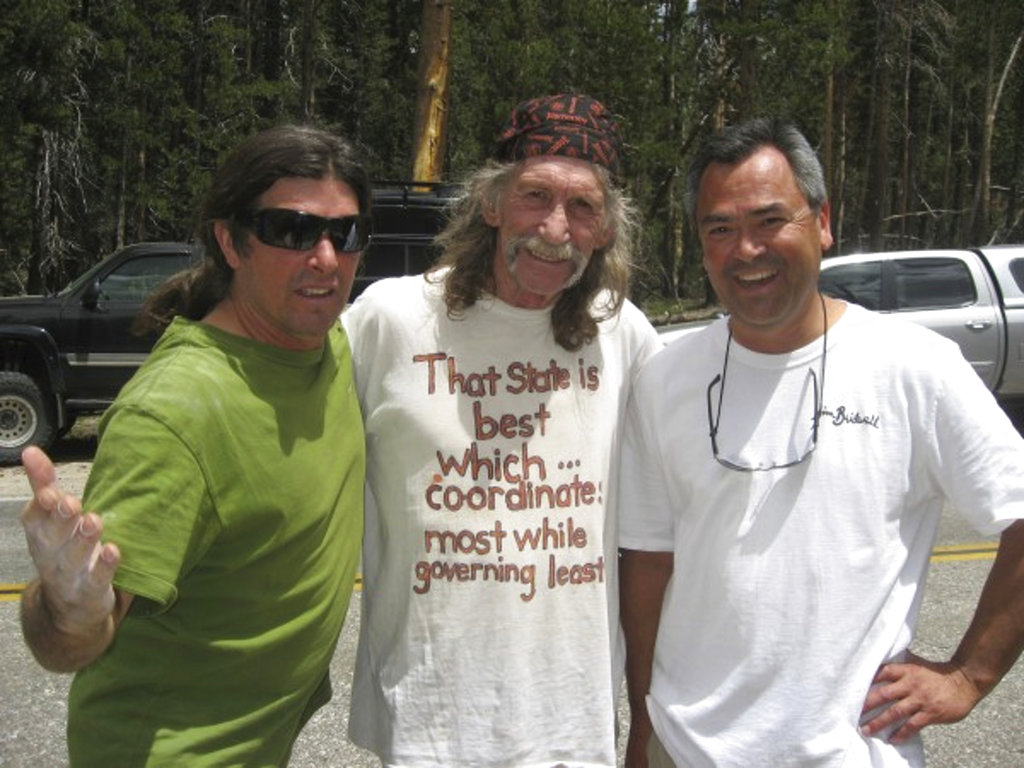 <
►
>
This undated photo provided by Ron Gomez shows early founders of the Yosemite Search and Rescue (YOSAR), Werner Braun, from left, Jim Bridwell, John Dill and Tom Cochran in Yosemite National Park, Calif. Bridwell, a hard-partying hippie and legendary climber who lived his life vertically on some of the toughest peaks in Yosemite National Park, has died at age 73. Bridwell died Friday, Feb. 16, 2018, at a hospital. He had liver and kidney failure from hepatitis C that he may have contracted in the 1980s when he got a tattoo from a headhunting tribe in Borneo, his wife, Peggy Bridwell of Palm Desert, told The Associated Press on Saturday. (Ron Gomez via AP)

But they were experts at free climbing and big-wall work, priding themselves on attacking the most daunting routes.

Instead of technical clothing, they favored white bellbottom or painter pants, climbing shirtless or in gaudy paisley shirts with headbands to hold back their long hair.

Bridwell frequently wrote or spoke about climbing as a form of liberation, although it cost him dearly. He suffered broken ribs and smashed teeth in accidents. At times he made money as a ski guide or held other jobs but frequently he just scraped by, often leaving his wife and son behind as he traveled the world.

“There aren’t many people who’ve managed to be a failure for this long a time,” he said in a 1986 profile in Rolling Stone magazine.

In 1982, Bridwell was in a group that made a 300-mile trek around, rather than up, Mount Everest.

Bridwell is also survived by his son, Layton.