The Cannabist’s special report “CBD, TBD” explores the issues with CBD — federal-state conflicts, national drug policy, pioneering research efforts and the paths toward the compound’s full legalization. This is the fourth installment in an ongoing series.

FORT COLLINS — Riley lumbered into the laboratory and greeted scientists with hefty, loving nudges and sloshes of slobber.

The 135-pound Newfoundland is a favorite at the Colorado State University Veterinary Teaching Hospital, where she’s among a few dozen pooches participating in one of the first scientific clinical trials assessing the efficacy of cannabidiol in treating certain canine ailments.

The non-psychoactive cannabis compound isn’t just hailed for its potential medicinal benefits in humans — the anecdotal evidence emerging from legal marijuana states has some pet owners wondering if CBD could be a life-improving medicine for man’s best friend. In Colorado, CBD-rich whole plant hemp extracts already are available for purchase online or at the neighborhood pet shop down the street.

However, scientists and veterinarians caution that clinical research is lacking, dogged by complications — notably marijuana’s Schedule I status and CBD’s shaky legal standing as it relates to another more familiar cannabis compound: psychoactive delta-9 tetrahydrocannabinol (THC), which can be toxic to animals.

CSU veterinary neurologist Dr. Stephanie McGrath began fielding queries about CBD’s therapeutic powers for pets after Colorado legalized recreational marijuana and cultivation of industrial hemp in 2012. Owners and vets alike called to inquire about the safety and efficacy of administering CBD to pups for everything from sore hips, to seizures, to anxiety caused by fireworks and thunderstorms.

What McGrath heard was extremely disappointing, she said. Some pet owners were dosing animals with their own edibles or other medical marijuana products procured to treat human ailments.

“That, as you can imagine, is not safe at all,” she said.

In addition to her concerns with the DIY nature of the dosing, McGrath said she was skeptical of what was being packaged and sold in pet stores. No qualified, peer-reviewed scientific studies had been conducted on CBD products for pets, she realized.

“Looking at it from a scientific standpoint and as a doctor, I felt really uncomfortable with the products being offered,” she said.

Whether it’s THC-laden marijuana or industrial hemp with traces of that illicit compound, cannabis is a Schedule I substance. The uncertain legal landscape surrounding CBD oil — even the hemp-derived variety — has stymied studies for humans and animals alike.

As such, the science isn’t there yet on aspects such as CBD’s effectiveness and dosing, San Filippo said.

“There are a lot of unanswered questions,” he said.

A CSU research team led by McGrath is starting to provide some answers for pet owners and veterinarians.

In March 2016, the CSU team completed work on a safety, toxicity and pharmacokinetic study of CBD in healthy dogs that was the first to demonstrate the compound was measurable in the blood and safe enough to warrant studies in a clinical population.

For the study, 30 research beagles were given high doses of a CBD-rich oil derived from Colorado hemp and produced by Fort Collins-based Applied Basic Science Corp. (ABSC). Of the three dosing methods tested — capsule, tincture and transdermal cream — tincture showed the most promise for safety and measurement in the bloodstream, McGrath said.

Side effects included diarrhea and an elevated liver enzyme, she said, noting that there were no blood test abnormalities that prompted the removal of a dog from the study.

The results, currently under peer review, were enough for CSU to green-light clinical trials.

The CSU studies are conducted with a double-blind method, considered the most reliable way to eliminate the power of suggestion since neither the researcher nor the test subject (which, in this case, also includes the pet owner) knows whether they have received a placebo.

The stakes are high for McGrath’s double-blind, placebo-controlled epilepsy study. About 30 percent of dogs on conventional anti-convulsant therapies continue to have uncontrolled seizures or experience side effects that are so debilitating that their owners consider it a poor quality of life, she said.

Sometimes those dogs have to be euthanized.

“It’s imperative, really, that we find a drug or drugs that are able to control seizures in dogs — and humans, for that matter,” she said.

Over the course of the 12-week trial, owners maintain a daily seizure log and patients are assessed and subjected to blood tests every four weeks.

The osteoarthritis study is a double-blind crossover, meaning that each dog will receive either a placebo or CBD oil for six weeks and then be “crossed over” to receive the opposite solution for the next six weeks.

Patients are required to walk for 15 minutes daily, and their vitals and activity are monitored by a “doggy Fitbit” collar. Every couple of weeks, the patient must pop into the lab for a gait analysis.

Those types of scientific analyses help to counterbalance any placebo effect that may be coming from the owner, Duerr said.

“We like these clinical studies because it gives us a chance to help individual dogs and also advance veterinary science,” Duerr said.

Enter Riley, the slobbery 3-year-old Newfoundland suffering from a rough bout of arthritis.

“I’ll try whatever I can to help her”

Previous surgeries addressed elbow dysplasia and a torn ACL, but the development of arthritis has slowed Riley down significantly of late. She can’t play for long without needing a rest. Sometimes, she lies down to eat. She cries at night when the pain gets to be too much.

“I’ll try whatever I can to help her,” said Astonna McCoy, Riley’s owner. “She needs to have a life.”

The Loveland resident initially signed up Riley for a stem-cell study at CSU. The treatment relieved her arthritis pain for a few months.

Then, “like a light switch,” it wore off, McCoy said.

That’s when McCoy learned that CSU researchers were beginning clinical trials measuring the effectiveness of CBD in treating symptoms of osteoarthritis.

At first, she was “freaked” to have Riley try any derivative of cannabis. However, the prospects of a long-term solution outweighed the minimal risks conveyed, she said.

Riley was in the lab in late May to establish her final gait baseline before beginning the osteoarthritis study. 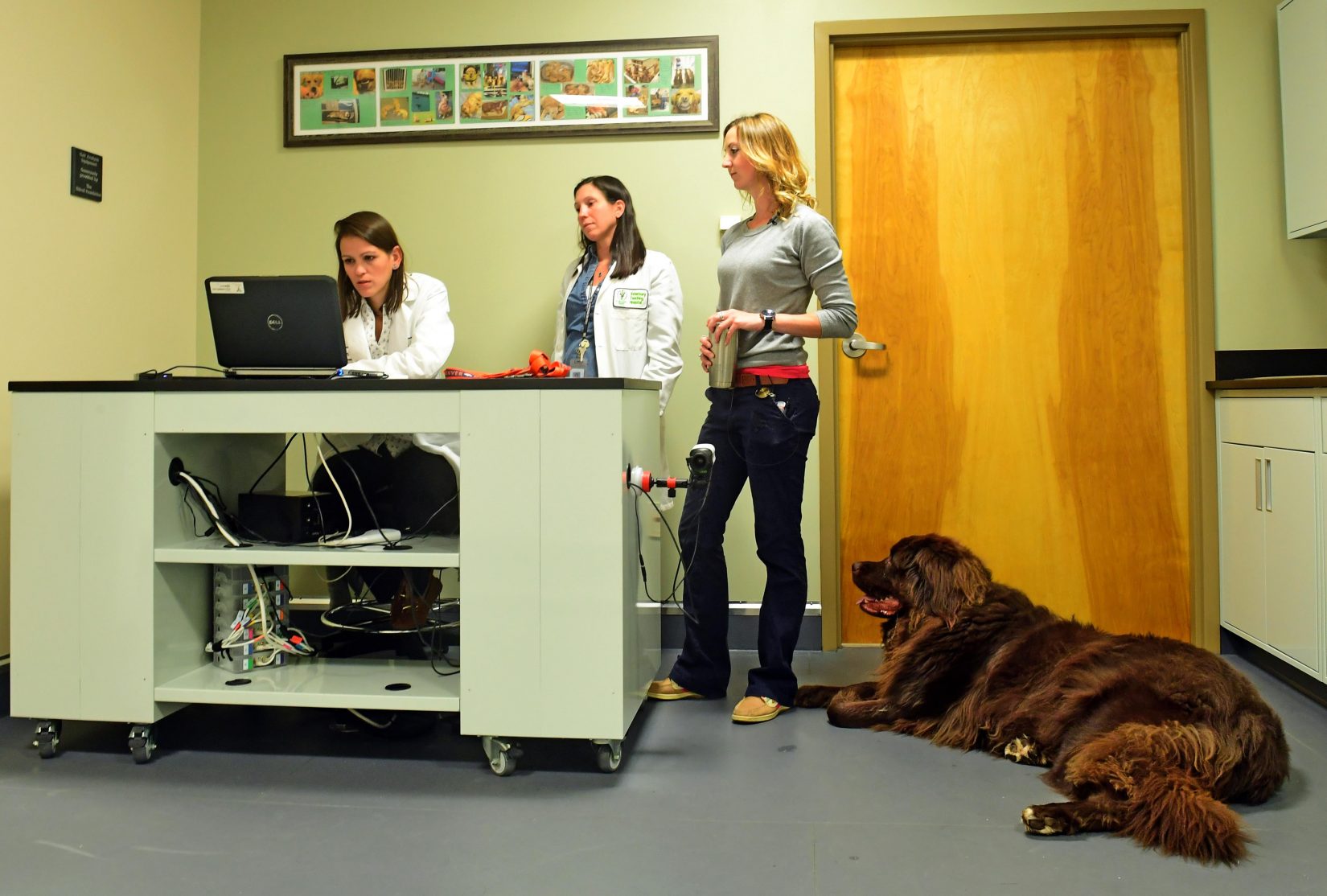 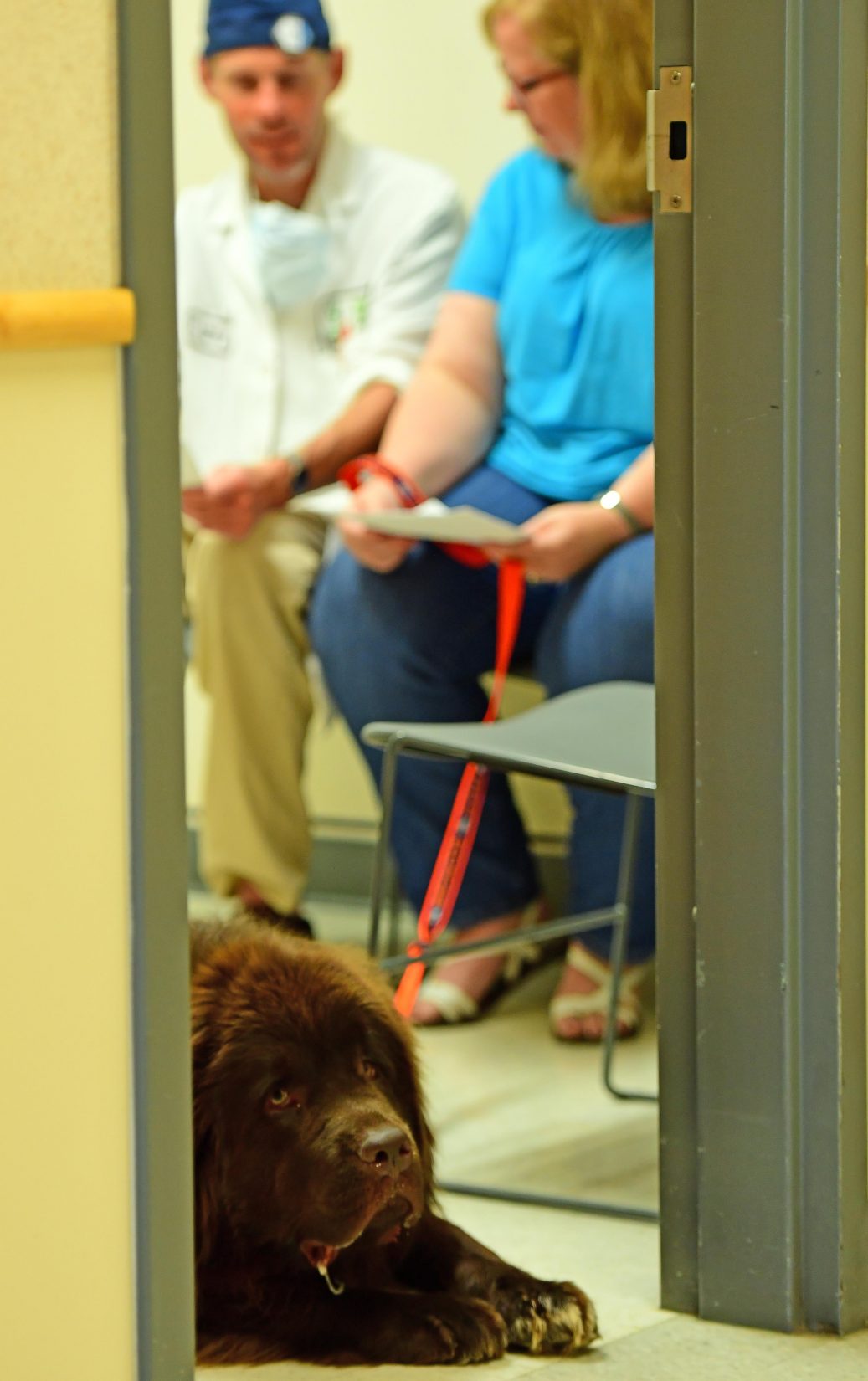 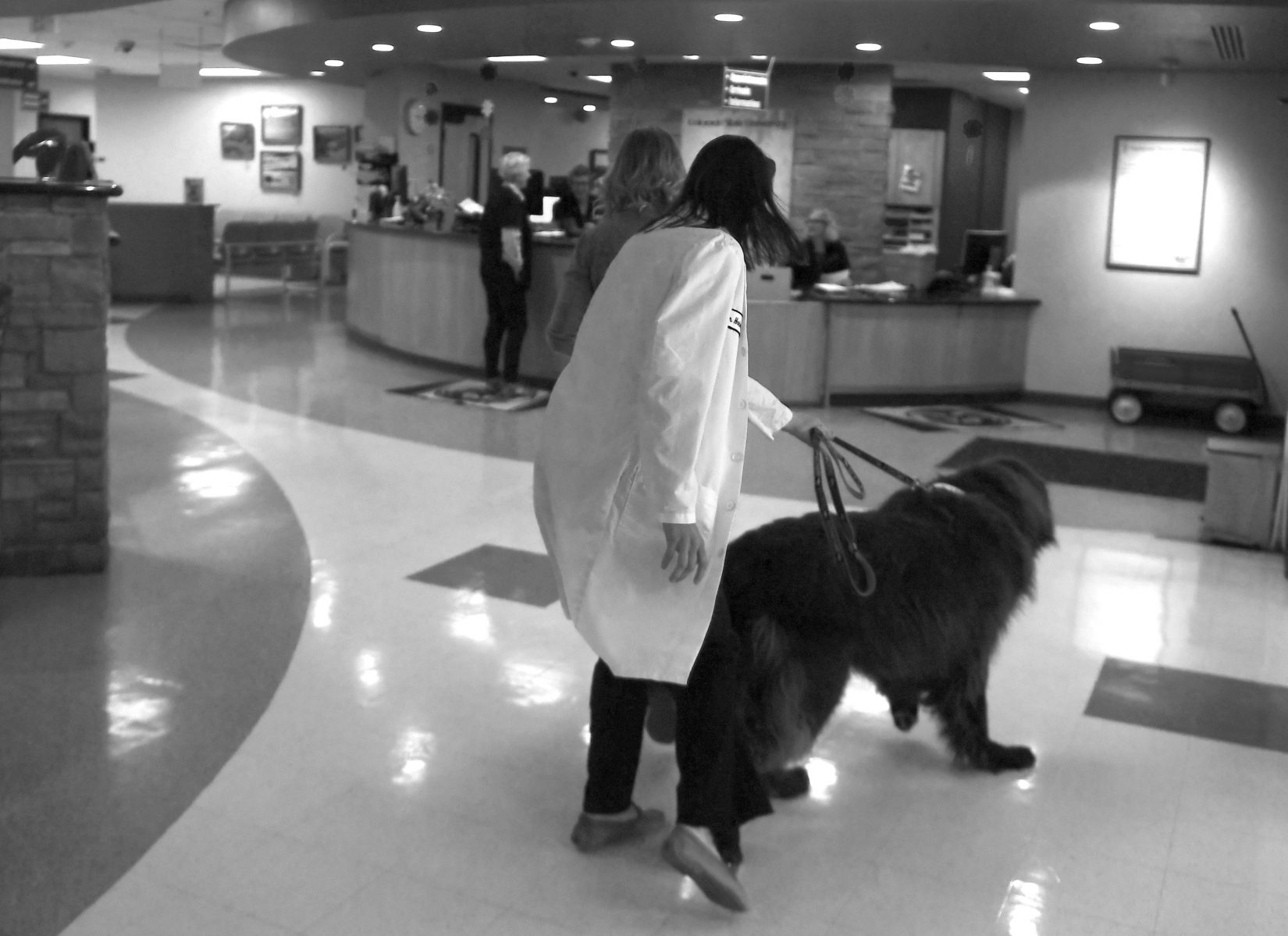 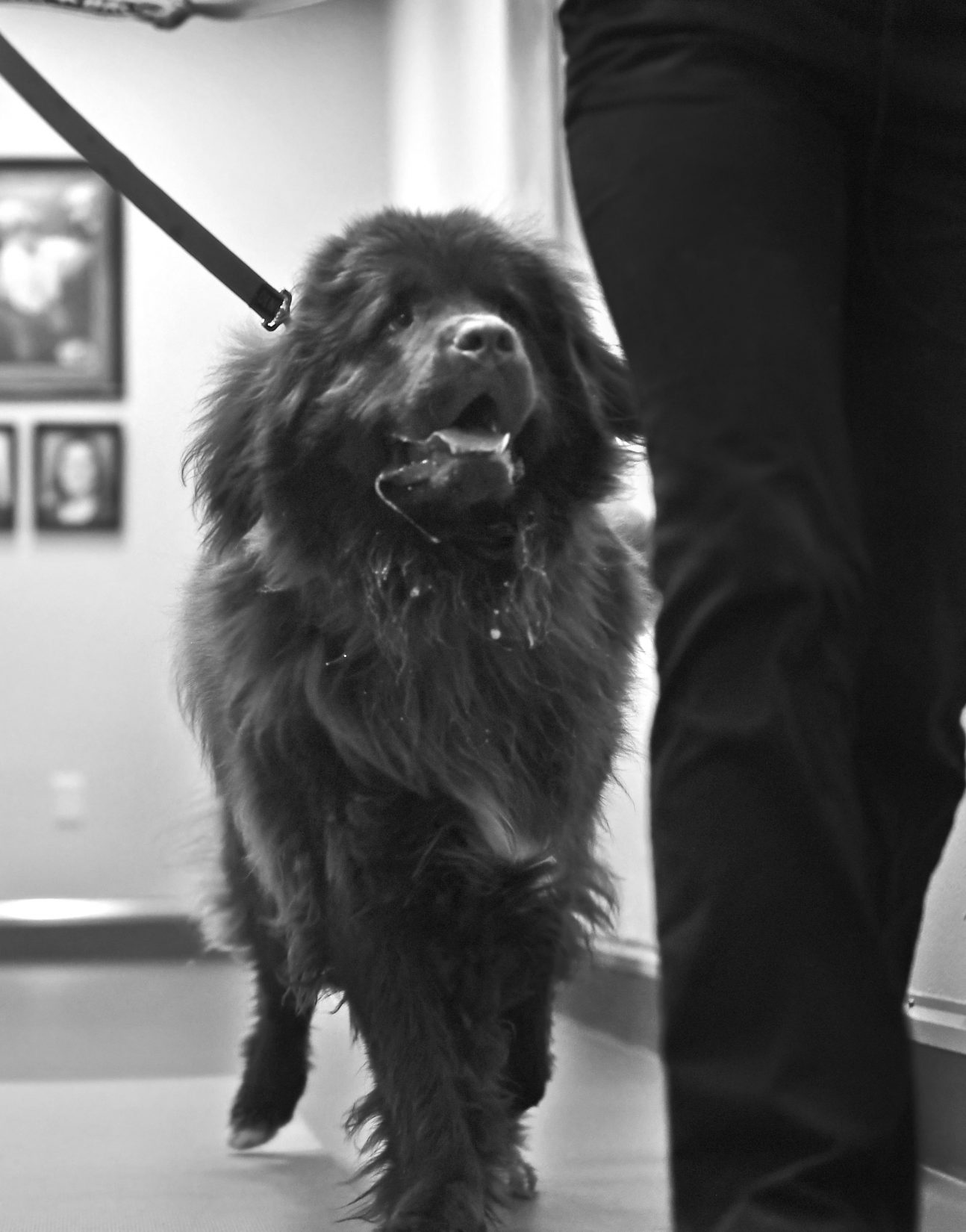 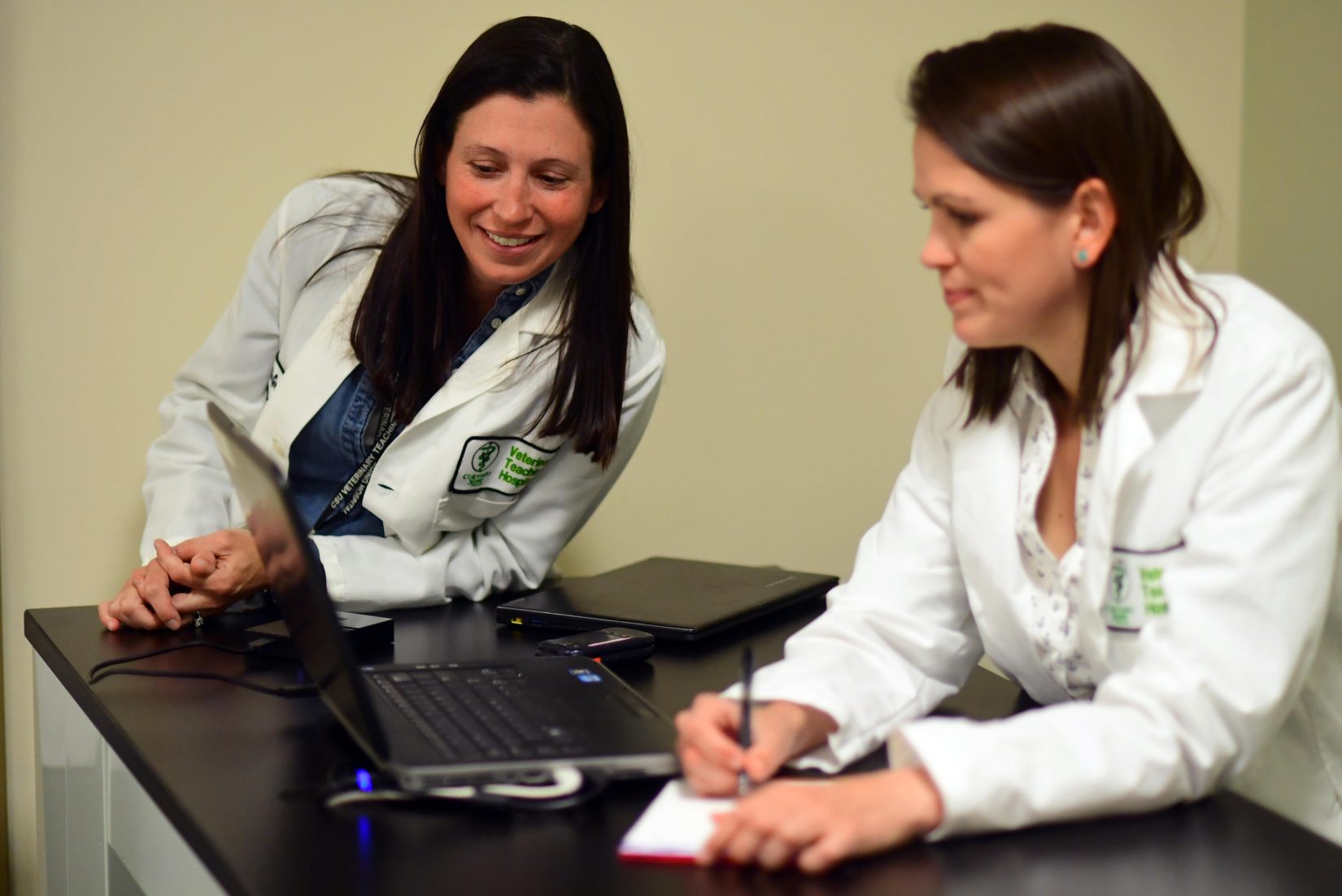 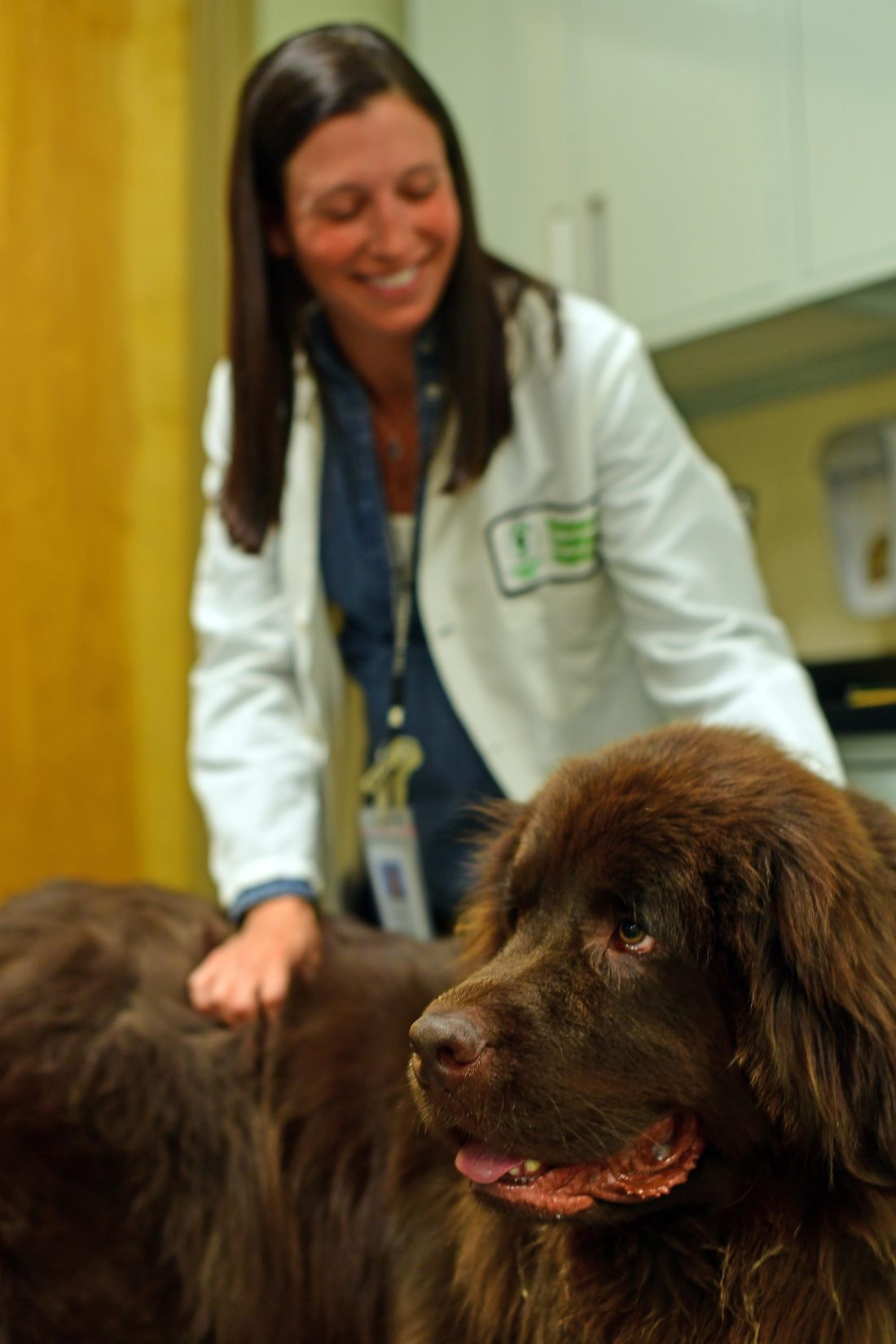 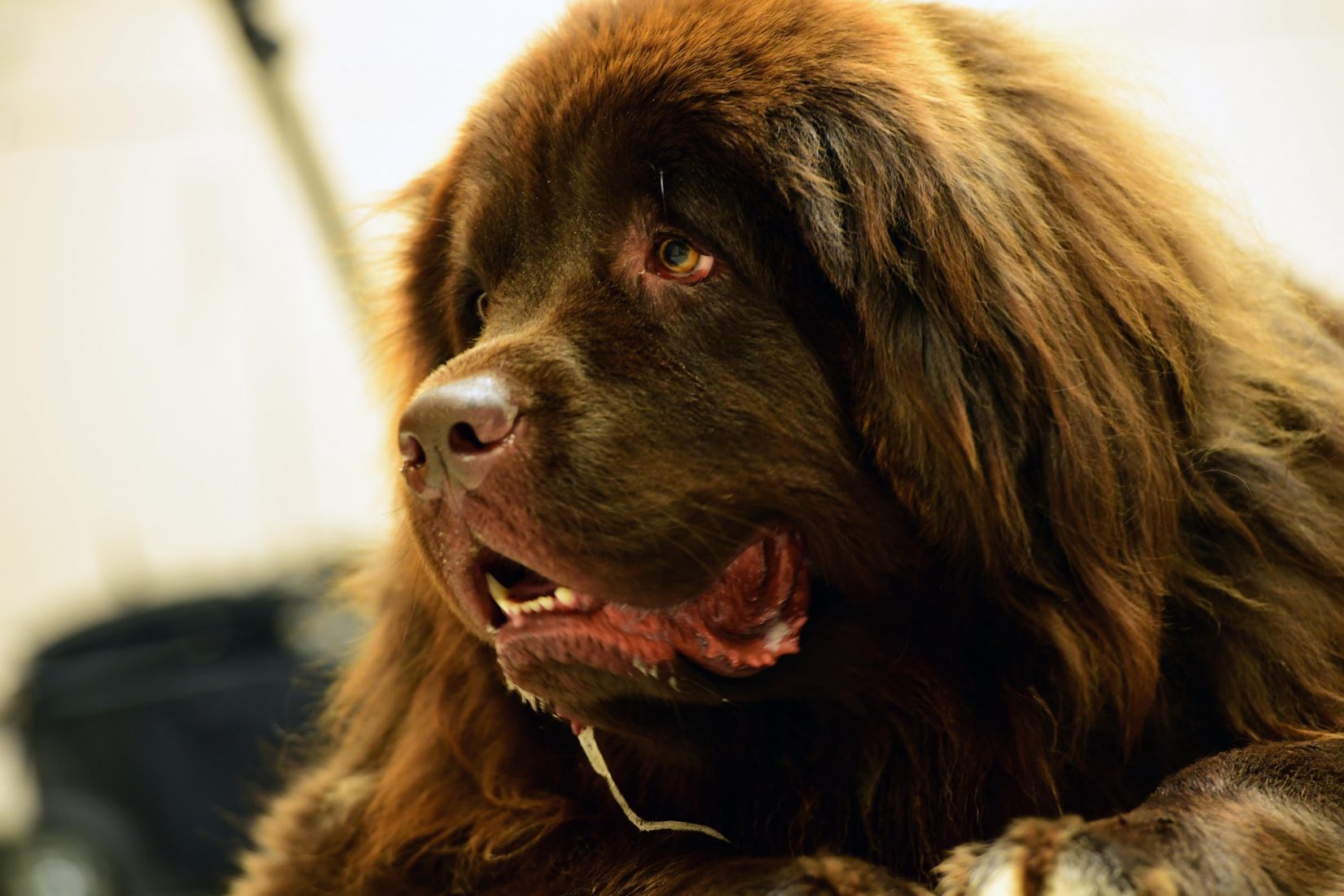 With the help of a research technician, the jovial giant took a few good gallops on a pressure mat measuring her every move. After the session, Riley was rewarded with a treat, which she devoured before slopping up an entire bowl of water.

Researchers will be checking for changes in how Riley uses her right foreleg after the analysis showed forelimb lameness and her shifting weight to accommodate for a bad elbow.

By early July, four weeks into the study, McCoy reported Riley was doing well, but still had her “good days and bad days.”

On some days, the Newfoundland was signaling for walks and playing more with her dog brother Tank, a 95-pound Golden/Labrador Retriever (Goldador). On other days, she was listless and inactive.

“I can’t wait to get to the end of this study to find out (the results),” McCoy said.

McGrath and Duerr said they expect the outcomes of their clinical studies to be available in the next 12 to 18 months.

Clinical trials are never cheap; but when the legal ambiguities of CBD are added to the equation, costs — and complications — can skyrocket.

CSU’s studies involving C.H.O. have been funded by producer ABSC.

The safety, toxicity and pharmacokinetic study cost the company $125,000, McGrath said. The two clinical trials are expected to cost the company about $250,000 each. McGrath disclosed she has a 5 percent stake in the company funding the CBD research.

ABSC was founded in December 2015 by New York entrepreneur S. David Moche, but the company held off on selling bottles of C.H.O., a strain-specific hemp extract targeted specifically for the pet market, before the completion of CSU’s preliminary safety study in early 2016.

“If we didn’t do the research,” Moche said, “(selling C.H.O. as a pet product) wouldn’t have been something I would’ve been interested in doing.”

ABSC started selling C.H.O. pet tincture, which it markets as the only scientifically tested product available. But the company isn’t the only player in the pet CBD arena investing in research.

Denver-based Therabis Pet Products, a subsidiary of Dixie Brands, is backing an efficacy study of its hemp-derived CBD products at the University of Pennsylvania School of Veterinary Medicine.

A Penn Vet spokeswoman declined to comment on the status or funding of the ongoing clinical trial.

For its part, CSU has general counsel and veterinary brass monitoring developments in the ongoing legal saga surrounding hemp-derived CBD oil. The university even developed an FAQ about cannabis-related research to assist scientists and others interested in pursuing the topic.

“I don’t think (a research university) has been in this situation — at least not in my lifetime — and seen this kind of ambiguity,” said Mark Wdowik, CSU’s assistant vice president for research and industry.

The university has seen an increase in hemp- and marijuana-related research requests since legalization, he said. The institution also has fielded more queries from companies seeking to fund CBD studies.

While CSU monitors the cannabis research front, projects such as the two canine clinical trials will continue to progress, Wdowik said.

“CSU is similar to other universities in that we want to be the honest broker,” he said.

ABSC’s Moche echoed the university’s sentiments. His company is operating within the four corners of Colorado law, which allows for some commercialization of hemp.