A musky marijuana bouquet wafted into a south Denver neighborhood as 4:20 p.m. approached on 4/20.

The International Church of Cannabis, which claims marijuana as its primary sacrament, officially opened for services at 3 p.m. Thursday in a 113-year-old house of worship at 400 S. Logan St. in the West Washington Park neighborhood.

At 4:20 p.m., Elevation Ministries leader Steve Berke called on the approximately 70 congregants in the main sanctuary to join him in silence with their sacrament. As lighters flicked, pungent plumes rose from the wooden pews up into the rafters painted with rainbow-colored geometric designs.

“Happy 420!” he said when the moment had passed. “Now, introduce yourself to somebody you don’t know.”

A cheer went up from the crowd as “Hits from the Bong,” a stoner anthem by Cypress Hill, started to blast over the speakers. People shook hands, hugged and passed joints.

“We’re stoked,” Berke said later in an interview with The Cannabist. “So far, the day has been amazing and we’re excited to introduce ourselves to the community and our neighbors.”

But the church’s official debut, dubbed “Elevate 2017,” wasn’t exactly what church leaders had in mind when they first announced their intentions earlier this month. Originally, Elevation Ministries had envisioned opening the doors to members of the public ages 21 and older.

When city officials caught wind of the group’s plans, they put the kibosh on public access to any events or ceremonies involving cannabis consumption. Instead, officials made clear in a meeting Monday with church leaders such events must be private, invitation-only functions.

“They threatened to throw me in jail,” Berke said.

During that meeting, church leaders were advised they had to comply with all city ordinances, said Dan Rowland, spokesman for the Denver Department of Excise and Licenses.

“We made clear that just like other events we’ve seen pop up around town, activities involving consumption must be restricted, private events,” he said.

Rowland cited the May 2014 Colorado Symphony Orchestra fundraiser “Classically Cannabis” concert held in a Denver art gallery as an example of how the city enforced public marijuana consumption ordinances. That event pairing chamber music and weed was also forced to switch from a public to private event.

Access to the church was tightly monitored on Thursday afternoon.

People who had previously signed on for a church membership through the Elevation Ministries website received an invitation; attendees had to register at the door, showing their ID to get a wristband before they could enter the premises.

Attendees were advised that cannabis consumption was limited to the sanctuary and an outdoor patio area on the south side of the building. Other rules outlined in the invitation and at check-in included a zero-tolerance policy for the sale of cannabis on premises, a ban on dab rigs, and “absolutely no alcohol.” The invitation also advised attendees not to “elevate” and drive.

Despite the restrictions, turnout was robust, even international.

Charles “Edgy” Edgerton made the pilgrimage from London, though he said he had planned to be in Colorado during April before he learned about the church. He said he wanted to check out the church because he agreed with their spiritual leanings.

“I don’t think marijuana is spiritual — I know it is,” he said as his female companion, who declined to give her name, rolled a joint atop an iPad Mini. “The plant returns us to our shamanistic roots, before spirituality was stolen by religion.” 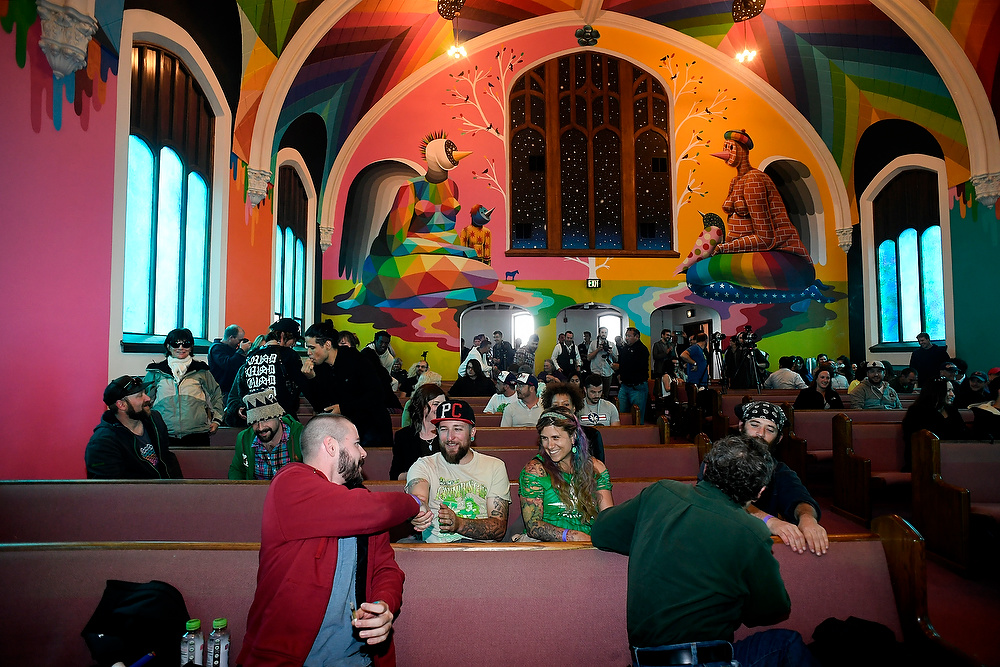 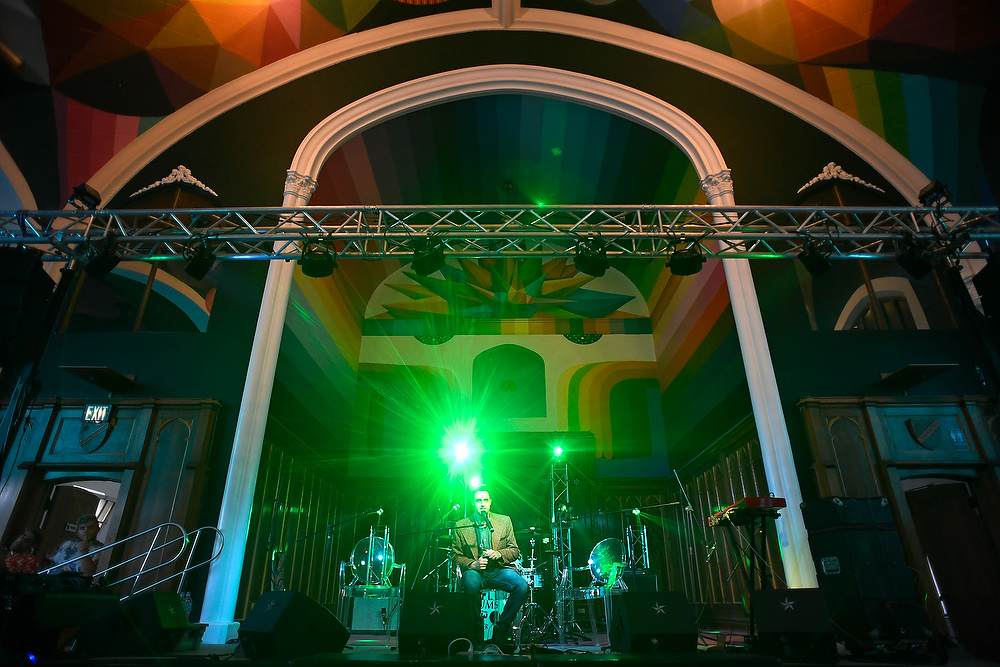 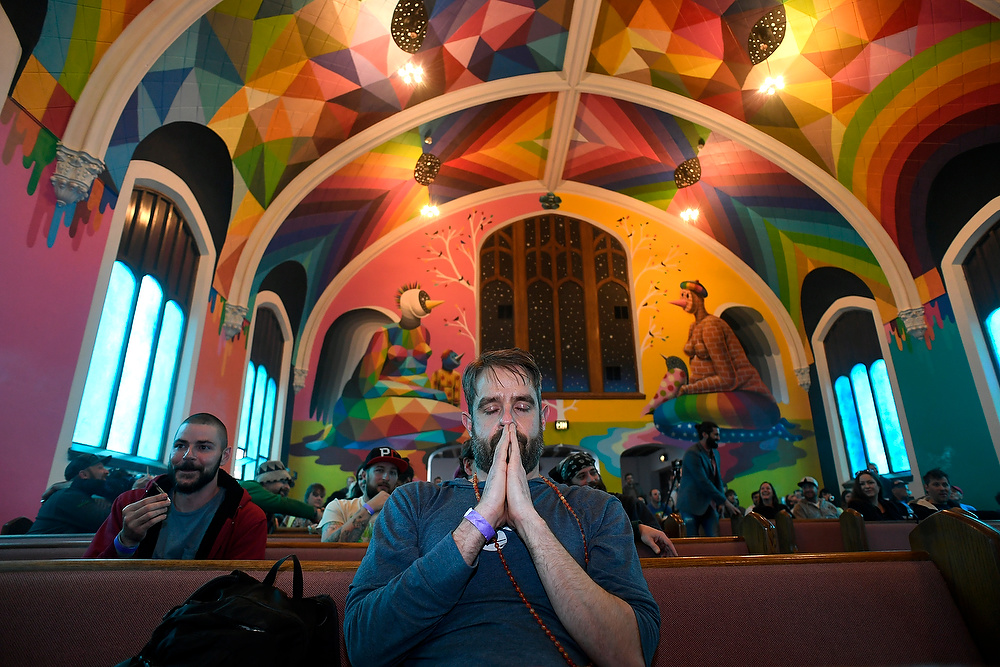 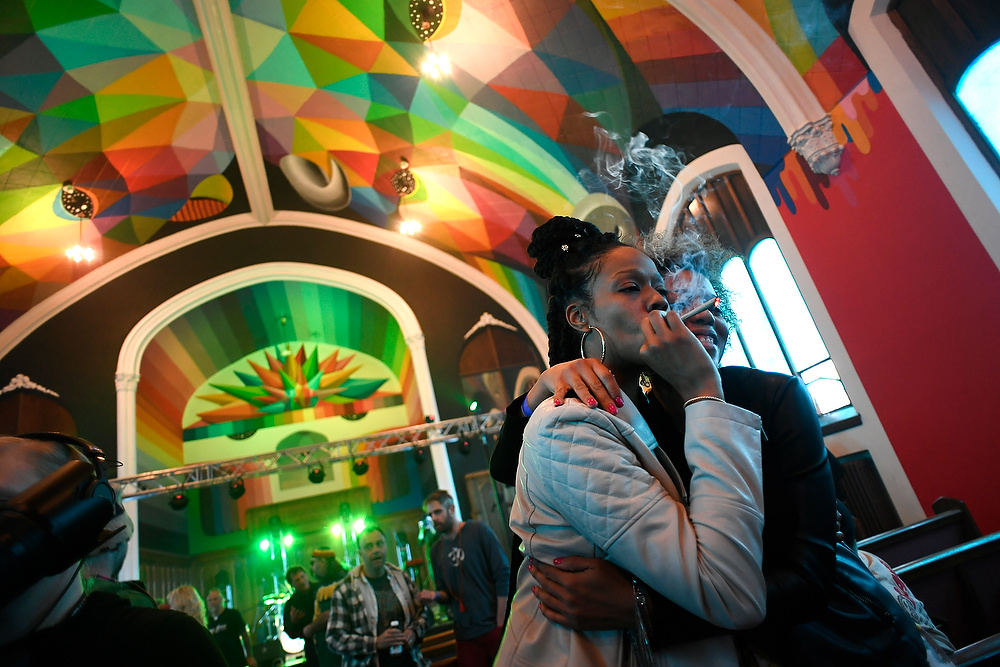 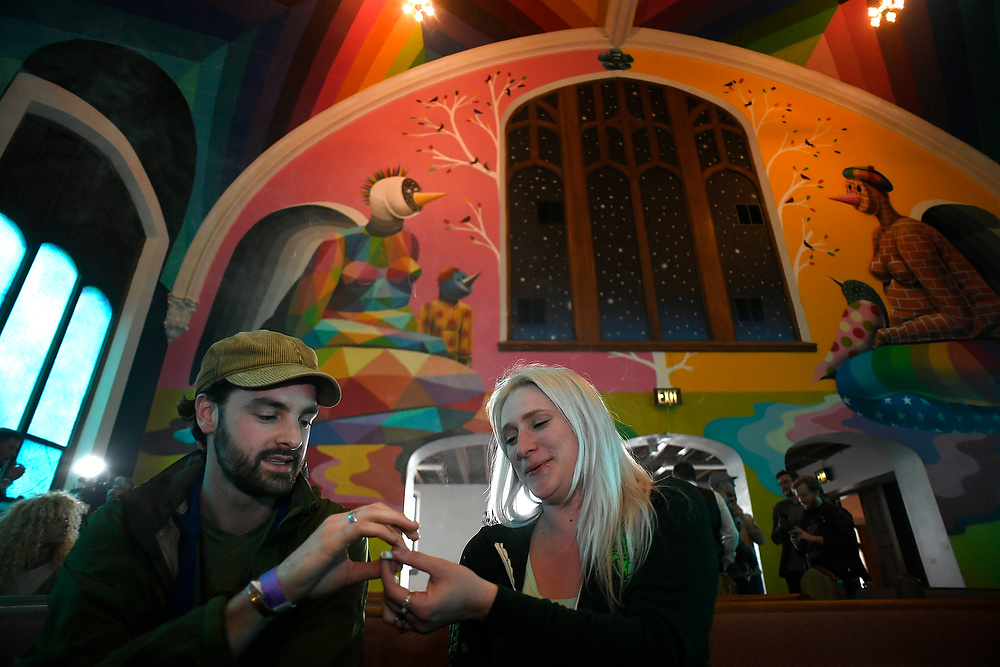 <
►
>
DENVER, CO - APRIL 20: Jimmy Smrz sits quietly during a minute of silence at exactly 4:20pm in the sanctuary of the new International Church of Cannabis as he joins other guests for the 4/20 celebration services at the church on April 20, 2017 in Denver, Colorado. The unique church chose the popular day and event to open their doors to the public. The members of this new church call themselves Elevationists and say that the use of cannabis helps elevate people to a higher form of themselves. (Photo by Helen H. Richardson/The Denver Post)

Felipe Crespo flew in from Florida with a friend just to attend the church’s 4/20 events.

Crespo said he was up late one night smoking pot and surfing the web and had the premonition to search “marijuana church.”

“This church came up, I read about it, and then I called my friend and told him we had to go,” Crespo said. “I think it’s amazing! The art is incredible, and we’re having a blast. It’s great to be able to sit here and smoke and not worry about cops or anything like that. We can just relax.”

Most of the crowd was from the Denver area, including Sue Allen and Joel Allen of Arvada. The married couple, who are in their 60s, were among the oldest of the congregants.

Sue Allen said she used cannabis to help manage the symptoms of multiple sclerosis, but added she could see how it enhances spirituality.

“We were curious, wanted to learn more, and that’s why we came,” she said. “It’s an interesting idea to explore.”

The International Church of Cannabis planned to continue its “Elevate 2017” programming on Friday and Saturday. After that, no additional events have been scheduled, Berke said.

Friday’s events include a panel with NPR One’s Roben Farzad covering cannabis “Social Influencers.” Also scheduled were a “Comedy and Cannabis” conversation with comedians Kyle Grooms and Ramon Rivas II, and a screening of the documentary “Square Grouper” about marijuana smuggling in Florida, followed by a Q&A with director Billy Corben.

Saturday’s schedule includes a Farzad-hosted panel on “Spirituality and Cannabis,” followed by stand-up performances by Grooms and Rivas II.

Reporting from The International Church of Cannabis, 4:22 pm MST. @cannabistco