Attorney General Jeff Sessions announced Thursday the repeal of Obama-era rules that set a federal policy of noninterference with state-legal marijuana businesses, setting up a potential clash between the federal government and state authorities backing an increasingly entrenched and popular industry.

Currently, eight states plus the District of Columbia have voted to legalize marijuana within their borders. The change in policy would allow U.S. attorneys in those jurisdictions to pursue prosecutions against state-legal marijuana growers, sellers and even users.

Under federal law, marijuana remains a Schedule 1 controlled substance, akin to heroin. But during President Barack Obama’s administration, the Department of Justice pursued a policy of noninterference with state-legal marijuana markets provided the states take reasonable steps to prevent underage use and keep pot from flowing across state borders, among other conditions.

Rolling back that policy is likely to cause political headaches for the Trump administration given the widespread public support for legalization, the economic clout of the marijuana industry and the supporters legal marijuana businesses have won over in Congress.

That number included, for the first time, a majority (51 percent) of Republicans saying they supported legalization.

Support for legalization is particularly robust among the young voters whom Democrats are trying to mobilize for the 2018 congressional elections. An April CBS News poll found that over three-quarters of Americans between the ages of 18 and 34 support legalization. 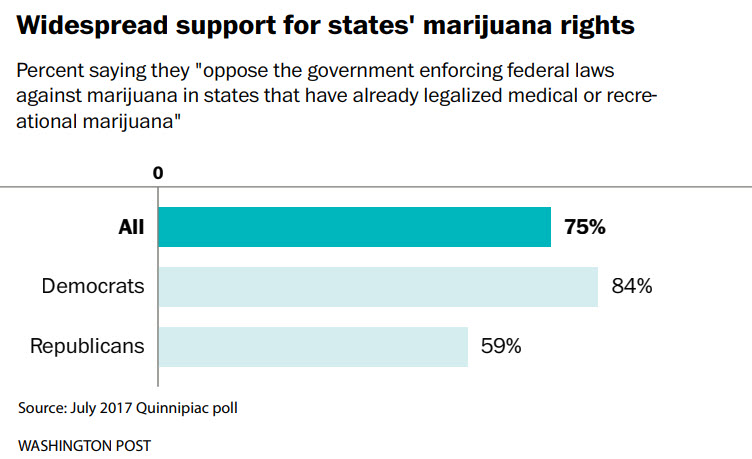 Regardless of their stance on legalization, an overwhelming majority of voters of all political persuasions say that the federal government should not interfere with state-level legalization efforts. A July Quinnipiac poll found that 75 percent of Americans, including 59 percent of Republicans, said that they oppose the enforcement of federal marijuana laws in states that have legalized it.

Beyond public opinion, the burgeoning marijuana industry has become a potent economic force in the states where it has a foothold. Marijuana Business Daily, an industry trade publication, estimated last year that legal marijuana employed between 165,000 and 230,000 workers, or between two and three times as many people as the coal mining industry.

Last year a market research firm for the marijuana industry, Arcview Research, estimated that it generated $6.7 billion in revenue in 2016, and projected sales to climb to $21 billion by 2021.

Those sales are generating significant tax revenue in states with legal recreational pot. In Colorado, for instance, marijuana sales between 2014 and 2017 brought in roughly $500 million in taxes, roughly half of which has gone to the state’s public school system. Washington state collected about $280 million in marijuana taxes in fiscal year 2017, with half of that money going to fund health-care services for people without insurance coverage.

Those jobs, sales and taxes could all be put in jeopardy by the Jan. 4 Justice Department move. Lawmakers from both parties are already crying foul.

“Going against the majority of Americans – including a majority of Republican voters – who want the federal government to stay out of the way is perhaps one of the stupidest decisions the attorney general has made,” said Rep. Earl Blumenauer, D-Ore., in a statement. “It’s time for anyone who cares about this issue to mobilize and push back strongly against this decision.”

Republican Sen. Cory Gardner of Colorado wrote on Twitter that “the Justice Department has trampled on the will of the voters in CO and other states. … I am prepared to take all steps necessary, including holding DOJ nominees, until the Attorney General lives up to the commitment he made to me prior to his confirmation.”

Related:“This is outrageous”: Politicians react to news that A.G. Sessions is rescinding the Cole Memo