SAN DIEGO — The prototypes of the Trump border wall are taking shape this month in a sun-baked swath of scrubland abutting a run-down neighborhood of Tijuana. Lined up next to each other, the 30-foot-tall concrete and steel sample barriers – some with extra-stout reinforced bases, others topped with metal spikes – certainly look ominous.

The requirements established to realize President Donald Trump’s vision call for “a fence that is impenetrable, it’s unscalable,” said Roy Villareal, acting chief patrol agent of the San Diego border sector. “They can’t dig under it. They can’t cut through it.”

Even these big warning slabs of concrete, the teeming construction site, and police and helicopters patrolling both sides of the border weren’t enough to stop a half-dozen would-be migrants from hopping the existing fence earlier this month and landing smack in the middle of the project, according to U.S. border officials.

Maybe the fence-hoppers were unlucky, or had chosen an ill-advised, hide-in-plain-sight strategy, but either way their experience is suggestive of how many Mexicans feel about Trump’s wall: no matter how it’s built, it’s not going to work.

“People are still going to cross no matter what is there,” said Kevin Avila Rodriguez, 17, who recycles trash and lives near the spot where the border wall prototypes are being built. “This won’t change things much.”

Most of the Mexican reaction to these prototypes ranges from offended to blasé. Residents of Tijuana and other border cities have lived with various types of American barriers for years, and they are used to them. The existing fence here, built in the mid-1990s, is roughly 10 feet tall and made out of metal sheets from helicopter landing pads left over from the Vietnam War. A second layer of more modern steel-mesh fence, 14 to 18 feet tall, stands behind that.

Despite this seeming fortitude, the two-ply system in San Diego was “compromised” – cut open with axes or motorized saws or blow torches – some 550 times just in the last fiscal year, according to officials from the U.S. Customs and Border Protection, or CBP.

One irony of building these brawny prototypes at this location is San Diego has long demonstrated the weakness of walls. Nowhere is more famous for its sophisticated border tunnels than this industrial sprawl near the Otay Mesa border crossing. The drug lord Joaquin “El Chapo” Guzman, now imprisoned in New York, disrupted the narcotics trade by building “super-tunnels” here that were dozens of feet deep, equipped with elevators and ventilation and lighting, to move vast amounts of cocaine into California. Seven tunnels of various sizes have been identified by the San Diego sector of the Border Patrol just this year.

The ground here, as one U.S. official put it, “is like Swiss cheese.”

Trump has pledged the border wall will stop both illegal immigrants and drugs. CBP officials, however, said the walls under consideration would likely not go deep enough to block large, sophisticated tunnels.

On the second day of prototype construction, a worker for one of the companies fell backward into what CBP spokesman Ralph DeSio described as a “40-foot-deep hole,” although this was unrelated to drug tunnels, and it did not result in injuries. “It wasn’t a good first step,” he said.

Since then, construction has hummed along. By the end of last week, portions of five of the eight prototypes had been erected, deploying various formations of concrete blocks and metal rods. Each company has a 65-by-65-foot patch of ground on which to build its prototype. 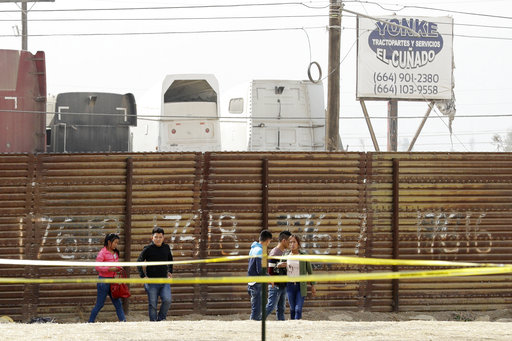 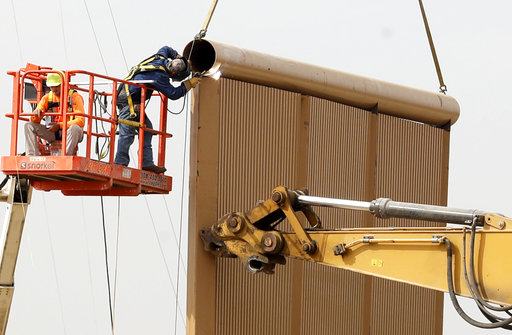 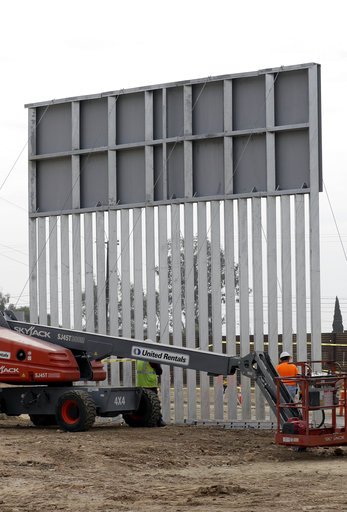 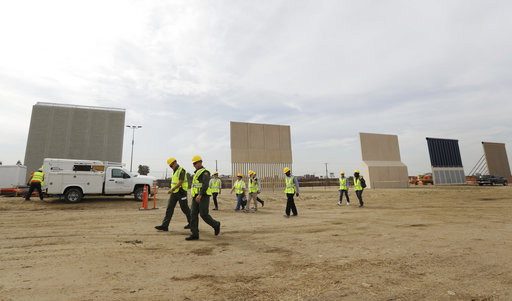 <
►
>
A group of people walk towards Border Patrol agents on horseback after being spotted crossing crossing the border illegally from Tijuana, Mexico, behind, near where prototypes for a border wall are being constructed Thursday, Oct. 19, 2017, in San Diego. Companies are nearing an Oct. 26 deadline to finish building eight prototypes of President Donald Trump's proposed border wall with Mexico. (AP Photo/Gregory Bull)

“This is a very unique project,” said the project manager, a CBP official who spoke on the condition of anonymity because he was not authorized to comment publicly, referring to the small workspace and that they’re building side by side. “So, we have to rely on their professionalism, good nature, and cooperation. And so far it’s been really good.”

The prototypes are being funded by the Department of Homeland Security. Trump would need congressional approval for funding before any of them could become an actual wall. Even then, CBP officials said they might not simply choose one winner but take aspects of different prototypes. Villareal, the head of the San Diego sector, said he appreciated how Trump has taken an interest in border security and hopes the wall can cut down on the 70 to 100 illegal immigrants apprehended in his sector each day.

The project has attracted rubber-neckers but has not sparked mass protests. San Diego police had considered restricting protesters to a designated “free speech zone” near the construction site but no large crowds materialized.

The Mexican government, besides refusing to pay for the wall, has not taken a stand against it, saying such construction is the sovereign right of the United States. The faltering NAFTA trade talks are alarming top Mexican officials far more than the wall.

“For me, they should make it even taller,” said one Tijuana municipal policeman who was patrolling the border near the prototype construction site. “So the crazies, like in Las Vegas, don’t come over here. I’m serious. The danger is over there. So many assassinations happen on your side.”

Many Mexicans have called the wall an insult. Not the police officer.

“What insult is there if it’s in your country?” said the policeman, who spoke on the condition of anonymity because he was not authorized to speak publicly. “What insults me is the government of Mexico, which doesn’t care about its own people. This is an insult. The money being robbed that they are not spending on schools, on science.”

Since the project abuts Tijuana, residents on the Mexican side have the best view of the construction. These neighborhoods, such as Las Torres and Nido de Las Aguilas, are poor and violent, clusters of shanties along unpaved roads. Two burned-out cars, torched within the past month, were abandoned near the fence.

Those cars were directly in front of the home of Cesar, a 60-year-old plant salesman who spoke on condition his last name not be used. He has lived there for 23 years and can remember how so many people used to mill around waiting to cross the border illegally that “it looked a market.”

The flow has slowed. He’s unsure why the United States needs a new wall now.

“I think they should spend the money on something more effective,” he said. “You’ll always see migrants.”

Other residents take greater offense at the project, which they consider a concrete monument to anti-immigrant fervor being whipped up in the United States.

“The president over there, he keeps insulting us, saying that we’re the worst,” said Audelia Avila Rodriguez, 21, who works in recycling and is the sister of Kevin. “This wall is just dividing families. It’s very ugly. It’s sad.”