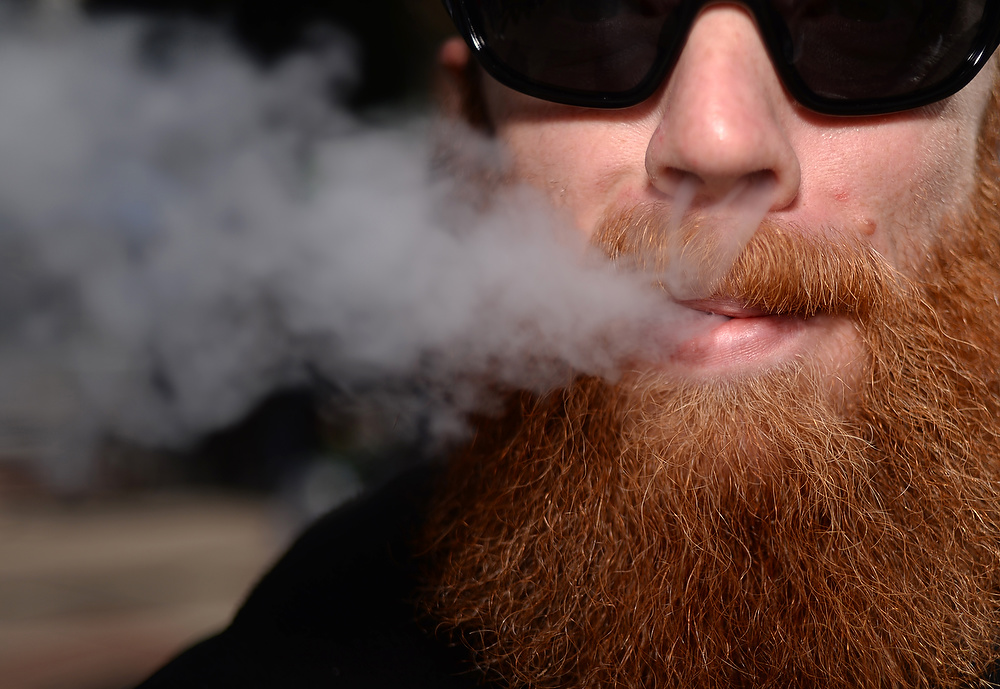 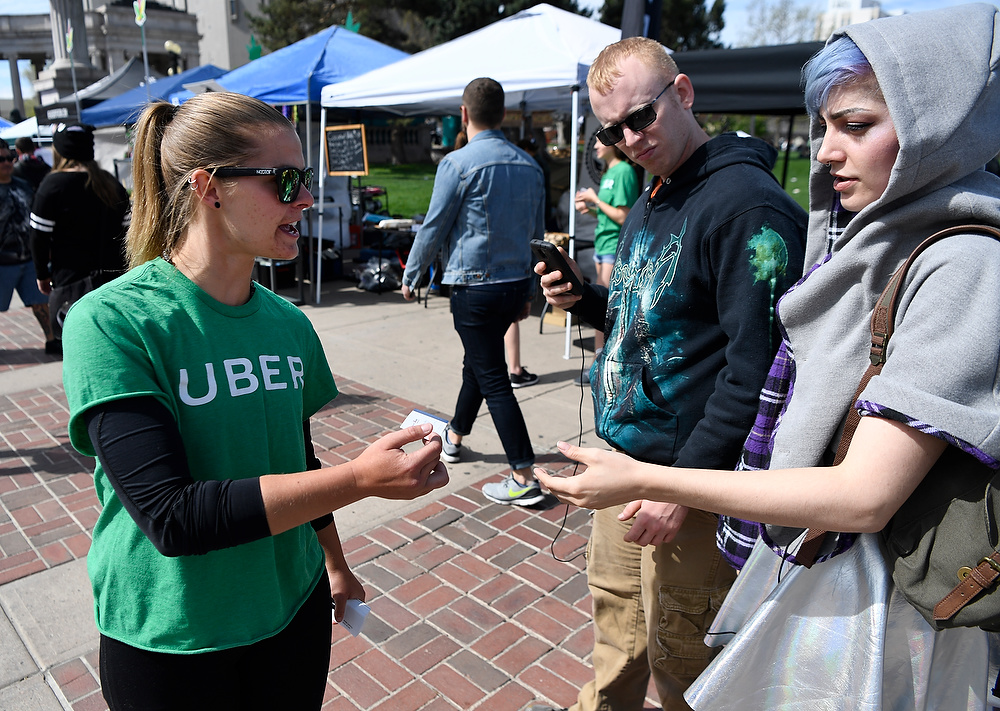 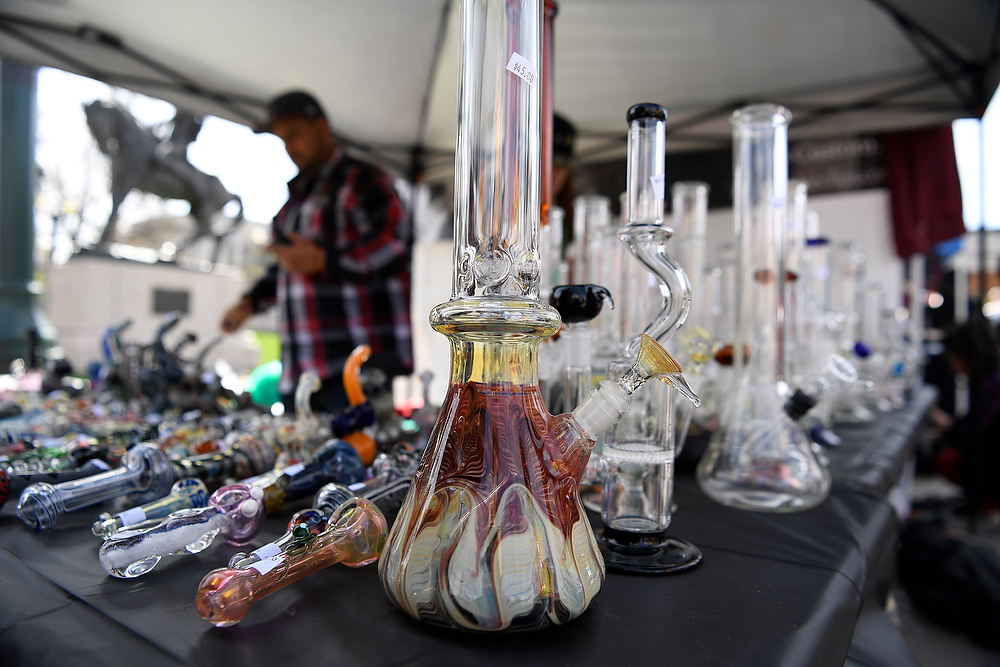 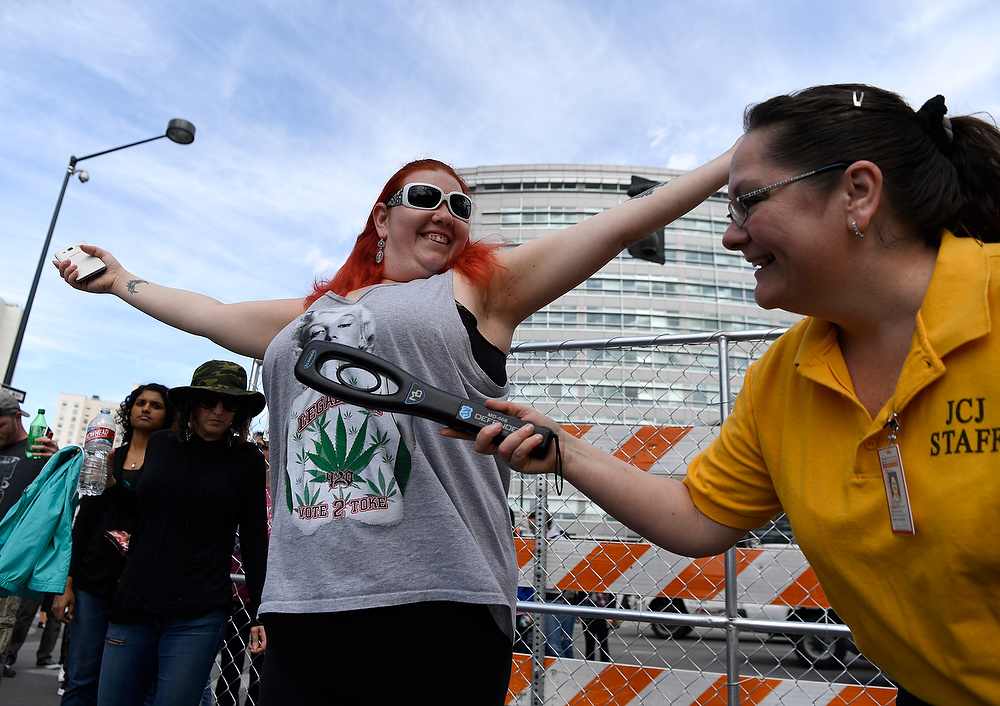 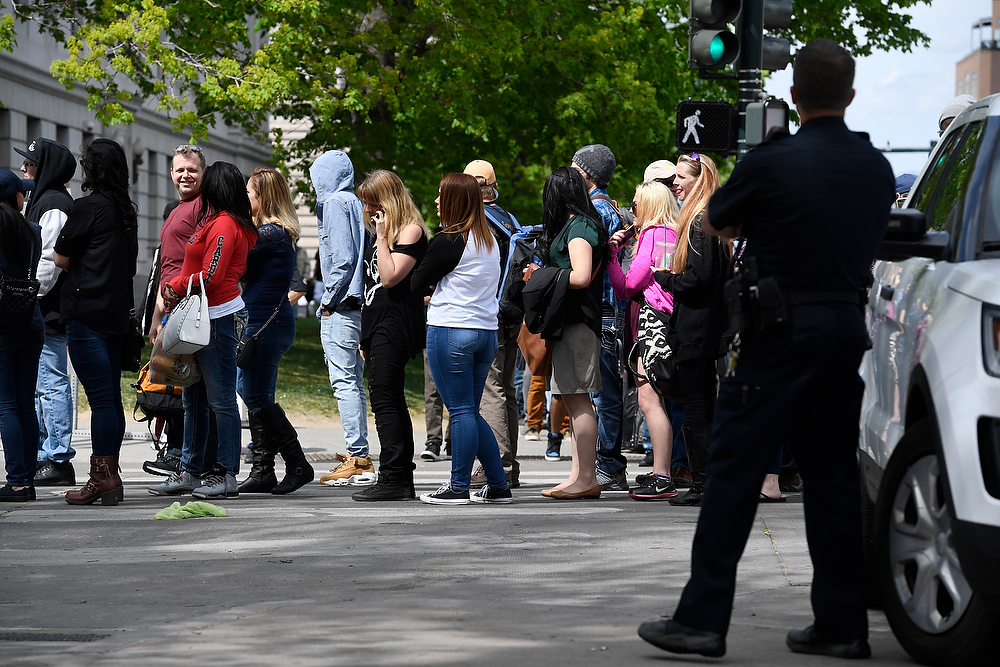 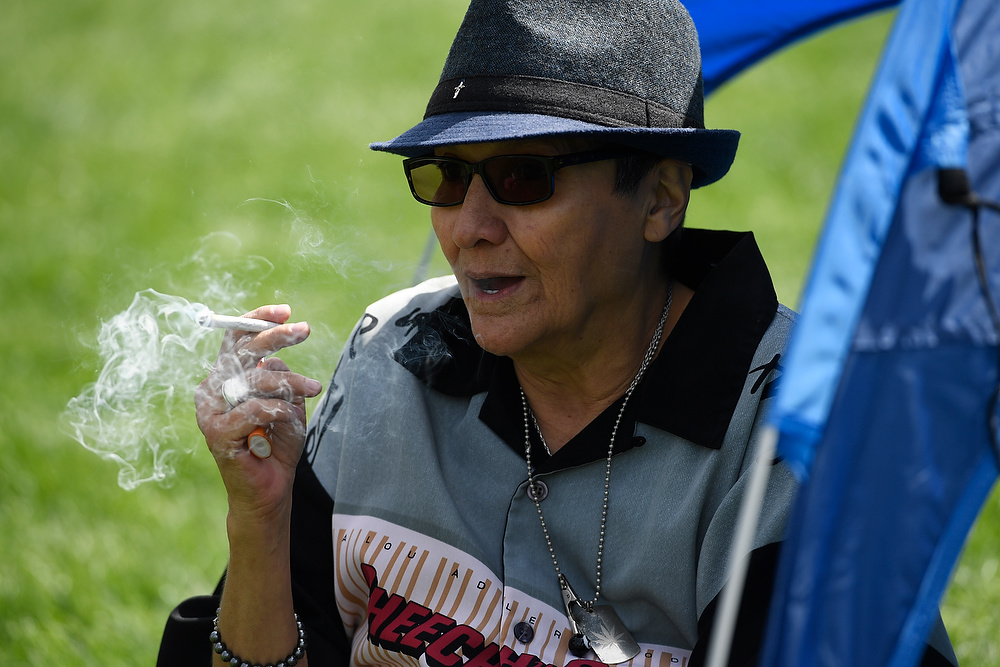 Hours before 4:20 p.m. — the moment at which a cloud of smoke would rise above Civic Center Thursday afternoon — lines persisted down West Colfax Avenue as hundreds of people waited to enter the annual 4/20 event that has evolved from a quick and simple protest rally into a full-fledged festival.

Rain sent some of the rally goers scattering in the early afternoon but the pot-enthusiasts returned to the booths and concert area once it subsided. People in the security lines stood sheltered by big umbrellas and rain ponchos.

Related: Two arrested after gunfire near Denver’s 4/20 celebration; no one hurt

The National Weather Service said the downtown area will likely see showers throughout the afternoon and overnight.

With Bob Marley and Wiz Khalifa booming and the smell of weed wafting, people who had passed through security checkpoints meandered through vendors, which ranged from the corporates, such as Uber, to the bong sellers. Some participants were from Denver while others traveled from Texas, Missouri, Minnesota and Philadelphia for the rally.

“It’s a peaceful day to get your mind off all the nonsense that’s going on in the world,” Paulette Cordova said, a 59-year-old breast cancer survivor wearing marijuana-themed socks and a Cheech and Chong “Up in Smoke” T-shirt.

The Denver native had tent and chair on the lawn. Though she said she’s used marijuana since she was 13 — as an alternative to liquor and harder drugs — last year was the first time she attended the event.

Some people weary of waiting in the slow-moving lines to get to the festival grounds pushed down fencing on the east side of Civic Center, allowing about 100 people to rush into the park. Others scaled the 6-foot chain-link barrier, although police sent at least one man back out of the park the way he entered it.

A police spokeswoman said she didn’t have information on arrests as of 1 p.m.

As of 2 p.m., the Department of Excise and Licenses had cited two people for handing out flyers for Euflora and Kinds Meds, which violates marijuana advertising laws, spokesman Dan Rowland said. At least 10 booths and food trucks have been closed for reasons ranging from health hazards to lacking an operating license.

This year’s rally has the potential to be both a celebration and a political rally. There has been plenty to light up to as Colorado’s marijuana industry is booming, pot legalization is spreading across the U.S. and Canada, and public support is at an all-time high. But at the same time, the White House has brought back hostility to legal marijuana.

Denver’s annual 4/20 rally has grown over the years. In 2006, about 2,000 people — mostly teenagers and 20-somethings — gathered in Civic Center Park to light up at the stroke of 4:20 p.m. This year, tens of thousands of people are expected to roll into the park. Additionally, there are 250 vendor booths and rapper 2 Chainz is scheduled for a free concert from 2-6 p.m.

Although the rally has been largely positive throughout the years, it did have a dark spot in 2013, when three people were shot after an argument unfolded between rival gang members.

The origins of “420” have been clouded, some claiming the term references a police code for marijuana possession. But recent consensus attributes it to a group of high school students who regularly met after school at 4:20 p.m. to smoke a joint.

Check out The Cannabist live blog of 4/20 here

The weather is rolling in for #denver420. pic.twitter.com/bjBpXVXCnv

And here's the obligatory rain photo #denver420. For a live blog and live webcam, check out https://t.co/KcJrZNLftS. pic.twitter.com/9XP59QxiFZ