SAN DIEGO — Willie Nelson’s relationship with cannabis is the stuff of legend.

Nelson is a legalization activist, a social warrior and now a ganjapreneur via his own Willie’s Reserve pot brand, and he still gets high regularly at age 83. But he’s also not the most discerning of cannabis consumers. Does Nelson prefer energetic sativa marijuana strains to the more calming indicas? “They’re both good,” he tells me. Does he prefer smoking weed to vaporizing cannabis oil? “I enjoy smoking both ways,” he says with an affable smile.

Smile for the camera: Virginia governor spotted with Willie Nelson…and his weed

Strain reviews: How the Willie’s Reserve line of weed tastes and smokes

Nelson becomes more passionate when addressing how this plant is often grown, especially in unregulated environments: “I don’t like it when they put chemicals and pesticides in it; That makes it not much better than a regular old cigarette.”

Sitting across the table from an eagle-eyed Nelson in his tour bus, I ask the country music legend if he considers himself to be a connoisseur of cannabis.

“I guess if anybody is, I would be,” he says, letting out a grizzled laugh that virtually self-italicizes the last part of the sentence.

It’s mid-October T-shirt weather here in southern California as a capacity crowd of 1,400 fans assembles inside the seaside Humphreys Concerts by the Bay venue — and also as more than 71 million viewers tune in to the third and final presidential debate between Hillary Clinton and Donald Trump.

Right as the San Diego venue’s doors open and as the candidates begin their sparring match more than 300 miles away in Las Vegas, my producer and I are ushered into Nelson’s tour bus — the fifth to roam roads under the Honeysuckle Rose banner, Nelson’s wife Annie kindly tells us. A few minutes later I’m sitting across a crowded table from the man, the myth, the legendary stoner.

When I mention that evening’s debate and the unprecedentedly bizarre presidential campaign leading up to it, Nelson grins.

I ask him if he’s applying his metaphor real-time, given that he’s talking to a journalist instead of watching the debate before his concert. He looks around his silent second home and laughs.

“Notice we’re not watching (the debate),” he says. “That’s a good sign. Delete and fast-forward — we’re moving on.”

Talking weed with an Outlaw

It’s not every day you get to chat up an original Outlaw. As an ex-music critic of a dozen-plus years, I have so many songwriting questions for Nelson — some of which had been contributed by readers and friends on social media earlier that day. But as a cannabis journalist, I’m now more interested in understanding Nelson’s longstanding, complex relationship with pot, especially given his unofficial role as Weed Ambassador to the World.

Still, I can’t help but start with the music. Do any of the songs he plays still make him misty-eyed?

“I could name a hundred. ‘Today I Started Loving You Again’ is a great song,” Nelson says of the oft-covered Merle Haggard tune. ” ‘I’m So Lonesome I Could Cry,’ Hank Williams. A fantastic song. I still love hearing those songs, and I still get emotional for some of those songs.”

Was he speaking literally when he wrote the hit “Roll Me Up and Smoke Me When I Die”?

“Literally,” Nelson says, pausing for effect, “I don’t give a damn. It was just a funny thing to say.”

Does weed help with his creative process?

“It has a lot to do with calming the nerves,” he says, “which makes the creative juices flow a little easier.”

Eventually I give in to my impulses and ask Nelson about his personal cannabis history, including his first time smoking marijuana.

“I think I was probably 19 or 20 years old playing in bars in Fort Worth, and I ran into a guy who smoked pot and I’d never smoked it before,” he says. “I smoked (weed) for a long time without getting high — for months I would smoke and smoke and I wasn’t getting high, and I couldn’t figure out why. And then one day I did and I said, ‘Oh OK, that’s what it’s all about.’ But I guess I’d smoked so much other stuff, cigarettes and things, that my lungs weren’t in great shape.”

When Nelson gets stoned, it’s not recreational use, he says: “It’s medicine, and it’s already been proven to be medicine. End of story.” Cannabis cures what ails him, Nelson tells me, and it also keeps him from getting into the trouble he used to get into with beer and whiskey and cigarettes.

“I had emphysema, had all kinds of different health problems caused by drinking and smoking,” he says. “So I decided I wasn’t getting high from smoking cigarettes, and I had a pack of Chesterfields, so I took them all out, threw them away, rolled up 20 big, fat numbers, stuck them into the Chesterfield pack and I haven’t smoked a cigarette since. And that’s been 30, 40 years ago.”

While Nelson will occasionally have a sip of wine, he’s mostly given up drinking: “I’m not afraid to take a drink of anything, but I just don’t get a thrill from it. I don’t need it.” And even though he still enjoys the act of combustion, putting fire to flower, he also considers himself “my own voice doctor” and says vaporizing is healthier than smoking.

“I’m sure lighting up a joint is not that easy on your lungs,” Nelson says. “A singer has to think about stuff like that. Smoking a joint in paper is not as good for your lungs as it is doing it in a vaporizer. It’s a no-brainer, really.”

Nelson calls cannabis-infused edibles “different — it’s more of a body stone, I guess. It took me a little while to acclimate to it. I wasn’t sure of it to begin with, but now it depends on what you want to do. If you wanna go to sleep, eat a piece of candy and you’ll doze off.”

An anachronistic view of cannabis

As you’d imagine, the singer-songwriter seems to have an endless supply of compelling stories that revolve around this still-controversial plant. The only time he’s grown pot from seed to harvest was decades ago when he lived in Nashville writing songs between tours. He smiles when he talks about cutting “It’s All Going to Pot” with his pal Haggard. And on one of his many early-career tours he recalls being broke down on the side of a road in Kansas and coming across a towering patch of what he thought was cannabis growing down by the railroad tracks.

“We cut down a tree of it and put it in the back, and we thought we were really gonna have some fun,” Nelson says. “But we got back to the hotel and cut it up and started smoking that damn stuff, and there wasn’t nothin’ to it. It was nothing but hemp, which is a different deal there. You don’t get high smoking hemp, you just get sore lungs. So we had a big laugh on ourselves.”

He does remember being lied to about marijuana, a substance that is scientifically less addictive than unscheduled drugs nicotine and alcohol. He remembers finding out for himself that weed is safer than alcohol — a fact research now backs up. And he won’t forget being demonized for his embrace of cannabis.

“It’s not the only thing we’ve been lied to about, if you stop and think about it,” he says. “I think we knew more than what most people gave us credit for knowing. We knew were supposed to be bad people because we smoked marijuana, but we knew we weren’t bad people. So we knew somewhere in there was a discrepancy that people had to realize that, ‘Wait a minute: It don’t make him a bad guy just ’cause he smokes weed.’ ”

But what surprises him the most about the world’s recent shift toward decriminalization and legalization?

“I’m still surprised it took this long for educated people to get a little sense,” Nelson says. “We’ve had so many negative things thrown at us about what it does to you and the bad things that marijuana can do to you. And ‘Reefer Madness,’ I don’t know if you remember that movie or not, but it was horrible and it made people really scared. And fear is a hard thing to overcome, so all that had to be overcome. Now when people smoke or eat a piece of candy they realize that, ‘Wait a minute. What’s the big deal?’ ”

When talking more about the War on Drugs’ negative consequences, Nelson unknowingly echoes the data in a Gallup poll released earlier that day showing that 60 percent of Americans want cannabis to be legal — an all-time high in nearly 50 years of polling on the question.

“Most of us have (overcome the fear),” he says. “Not everybody. I don’t think we ever will be 100 percent for it. We’re not really 100 percent for anything. There are always a few stragglers over there who can’t really understand it.”

The conversation steers toward the presence of dry counties in the American South that still disallow alcohol sales, and I take the opportunity to get Nelson’s take on the legalization movement in Arkansas, where the Bible Belt state will vote on two potentially historic medical marijuana initiatives on Election Day (although one of the measures was disqualified in a court ruling Oct. 27).

“Well, it’s in the Bible,” Nelson says flatly. “Ezekiel 34:29, where Jesus is talking about seeds and he said, ‘I bring you a seed of renown for the miseries of humanity.’ ”

My time with Nelson is almost up. We’ve covered a lot of ground, and the election talk leads again to national politics when he offers up an anecdote that perfectly encapsulates Nelson’s open-armed philosophy to weed, to music, to life. 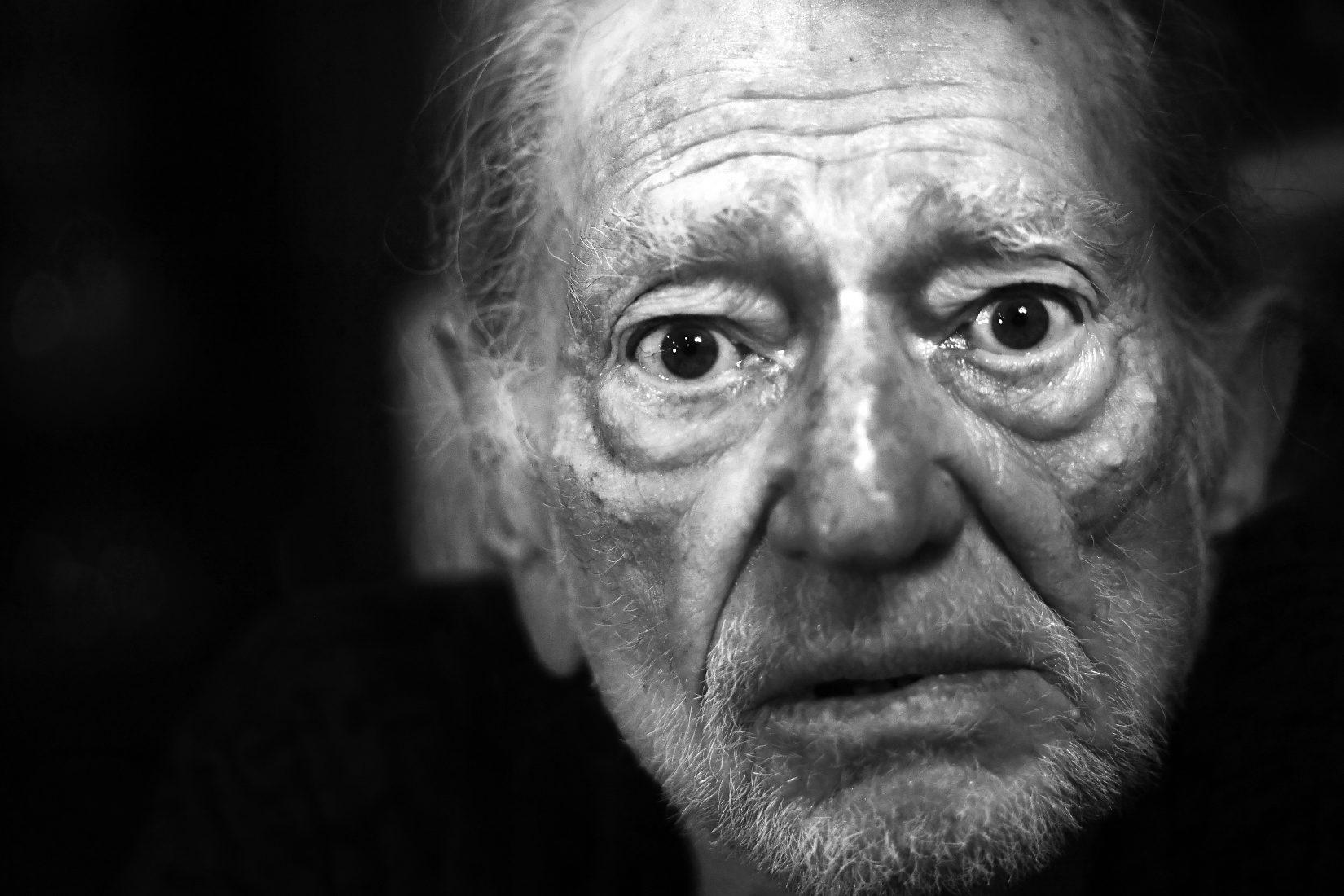 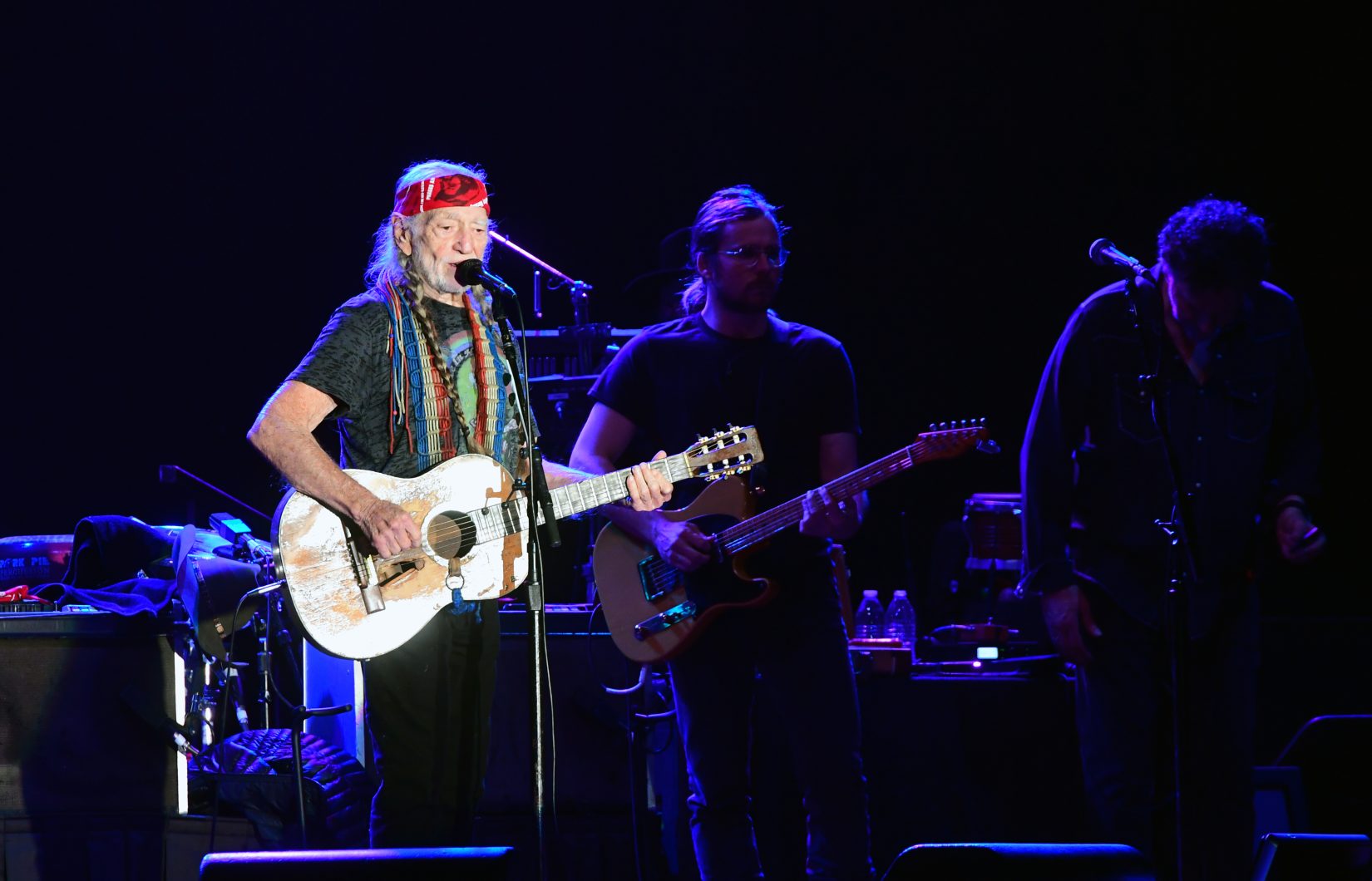 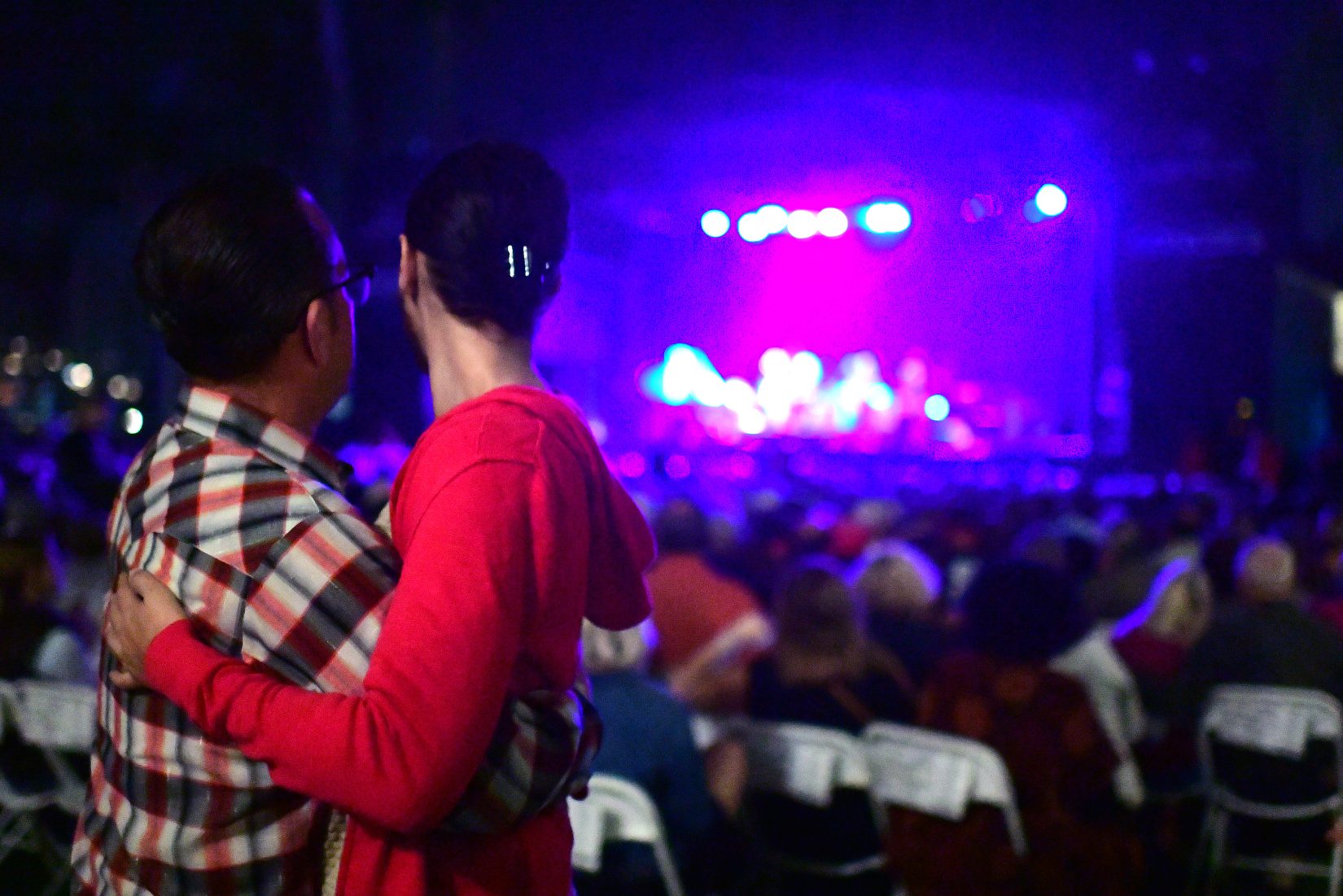 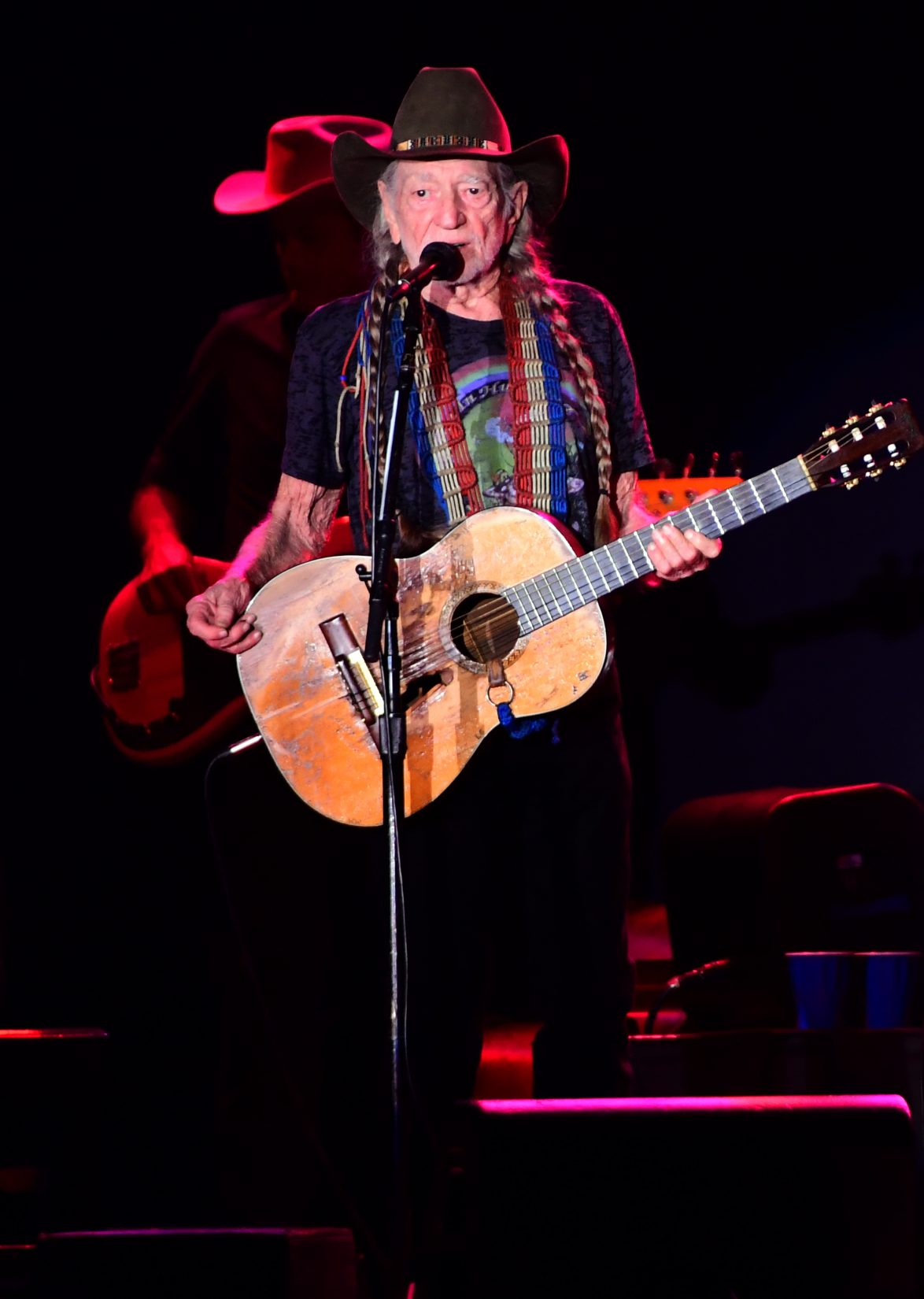 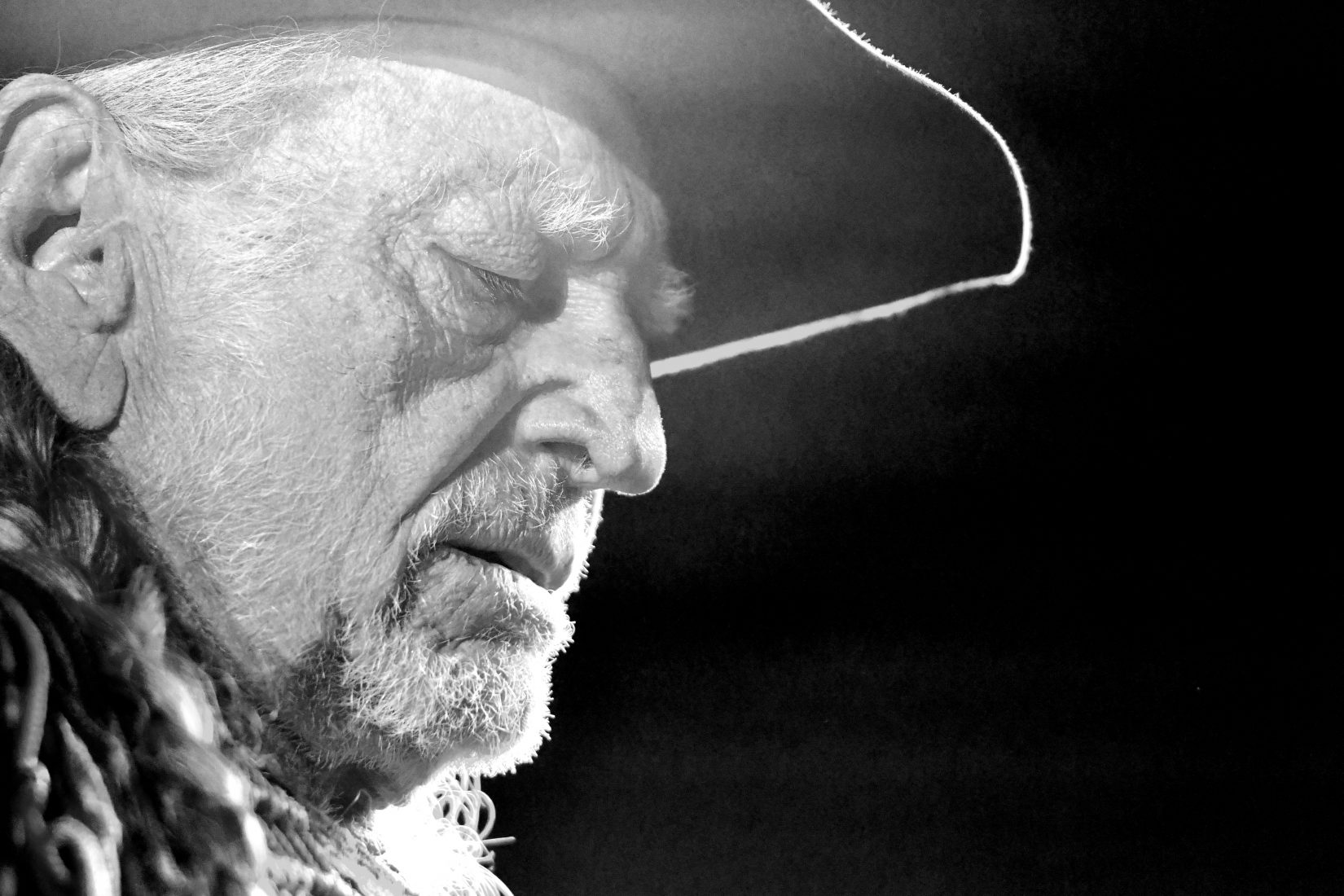 <
►
>
A couple dances as country music legend and legalization activist Willie Nelson plays a show at Humphreys Concerts by the Bay in San Diego in October 2016. (Vince Chandler, The Denver Post)