The city of Denver is proposing changes that would limit unlicensed, non-residential marijuana cultivations to 36 plants.

The officials behind the proposed change, which would chiefly affect over-sized collective grows and caregivers with a large number of plants, hope the amendment would make for safer conditions, clearer law enforcement options and fewer opportunities for untracked marijuana to escape into the black or gray markets.

The City Council’s Safety and Well-being Committee unanimously approved the proposal Tuesday, but members including Robin Kniech and Albus Brooks voiced worry that the rules don’t go far enough. The unlicensed, non-residential grows exist in the cracks of Colorado’s marijuana legalization amendments, and they suggested exploring a new kind of licensing for those that are allowed by state regulations.

Ignorance is bliss? Citations for public pot use increasing in Denver, Aurora

Pot perceptions: Denver ‘is not a stoner town,’ but cultural attitudes on pot are evolving

More: Get more news from the Mile High City

“The majority of these non-licensed grows have significant problems around unsafe conditions,” said Ashley Kilroy, the city’s executive director of marijuana policy, before the meeting.

Some of the city’s safety concerns in these unlicensed grows: Fire exits bolted shut and windows covered with steel sheets; unregulated chemicals and pesticides; the presence of mold; fire hazards such as plastic trash bags draped across grow lights; employees living on site; weapons mounted on walls.

The proposed regulations require full council approval. The earliest it could take a final vote on the issue is March 23.

“We need an explicit prohibition and bright line rule limiting plants to 36,” Kilroy said. “We also have significant concerns about large amounts of untracked, non-licensed marijuana and the opportunity for crime and diversion.”

The proposed plant limit would not affect licensed grows or the 12-plant limit already in place for residences. Caregivers could still grow 36 plants, enough for their five patients and themselves, the city says.

“Caregivers are prohibited by law now to grow collectively,” Kilroy said. “Amendment 64 is silent on collective growing, so again, we need a bright line to provide clarity to our residents and to law enforcement and safety officials.”

Some photos of the city’s complaints on pot grows, courtesy of the city: 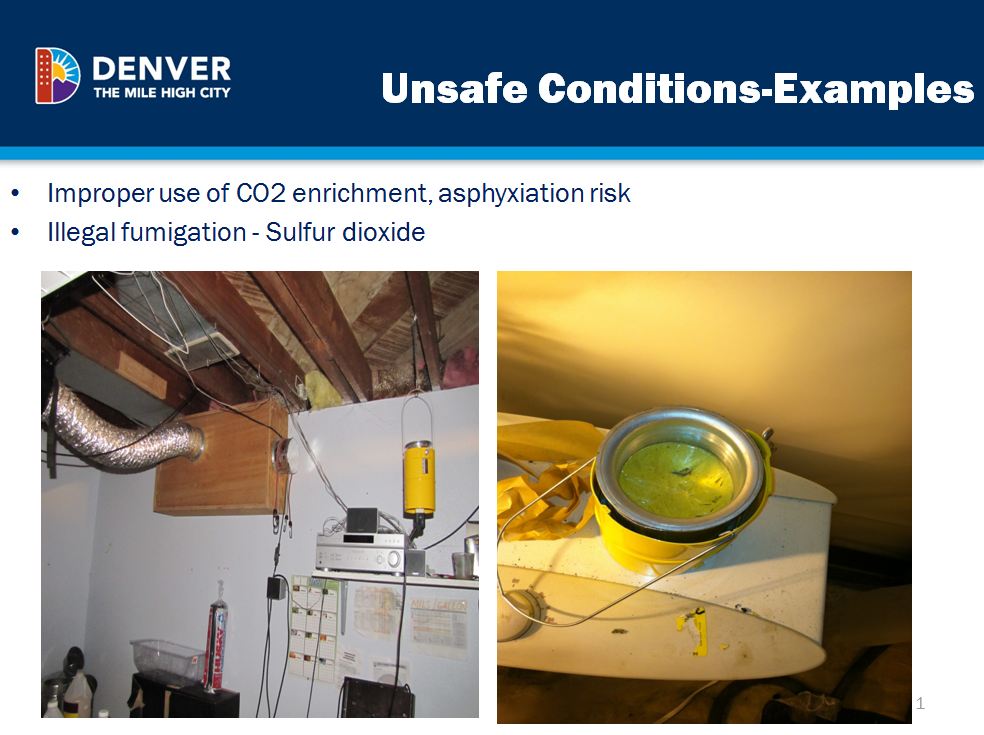 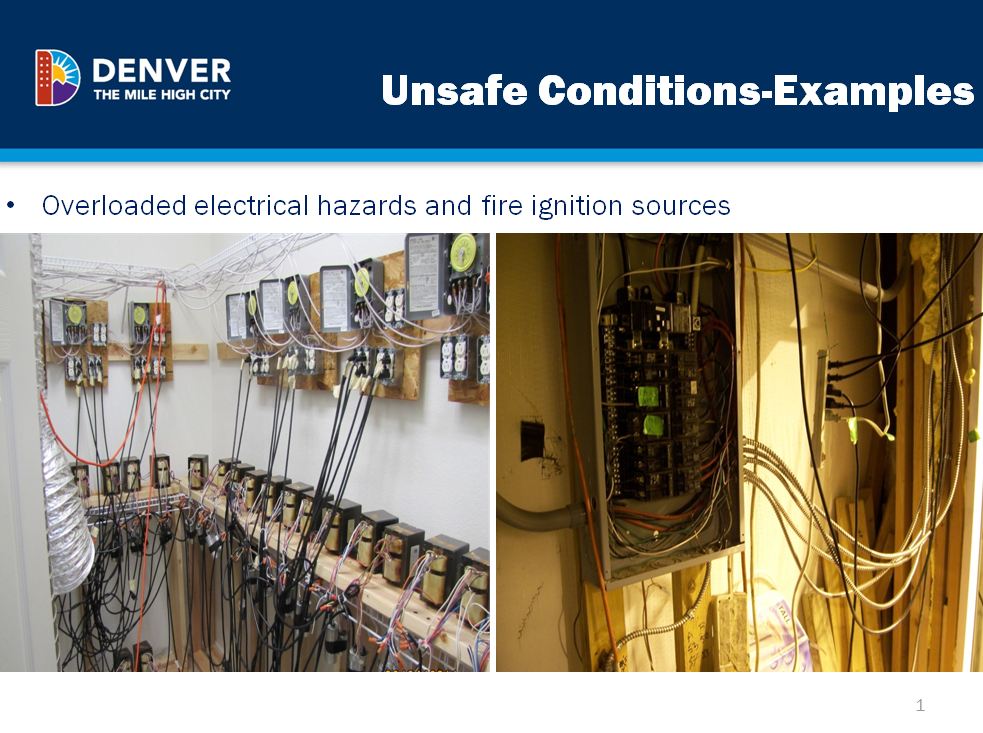 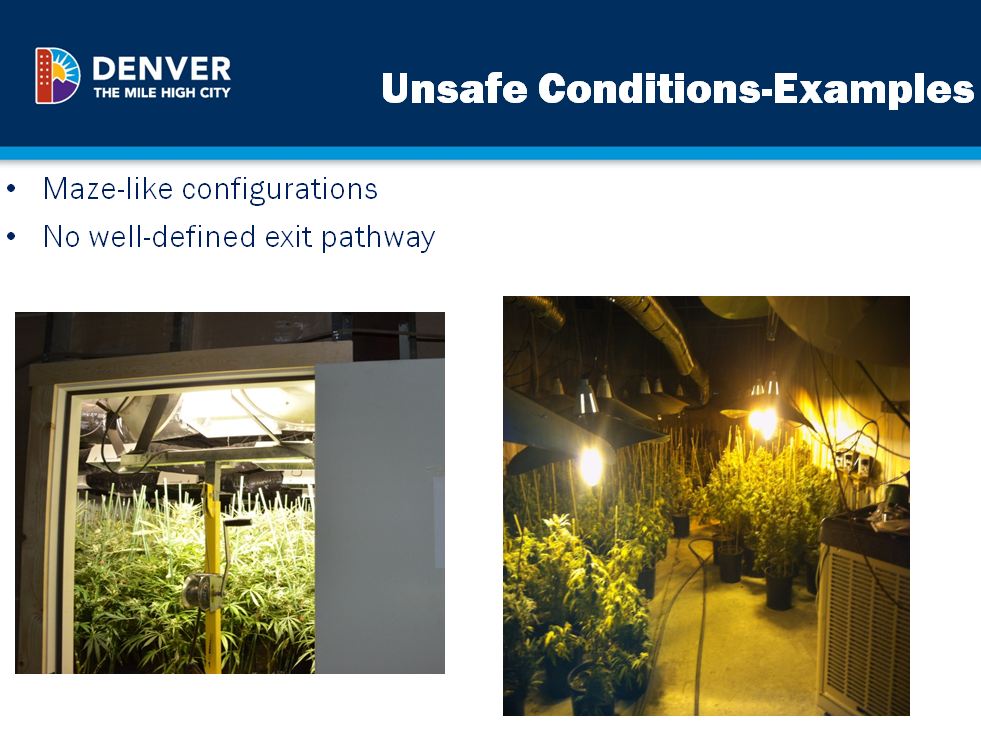 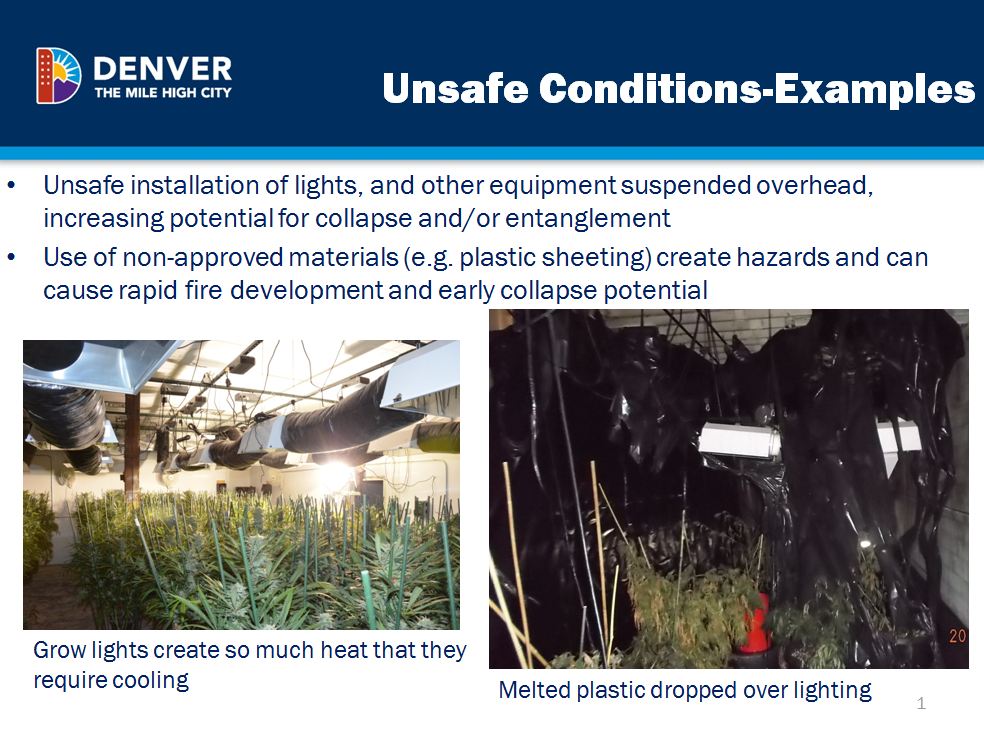 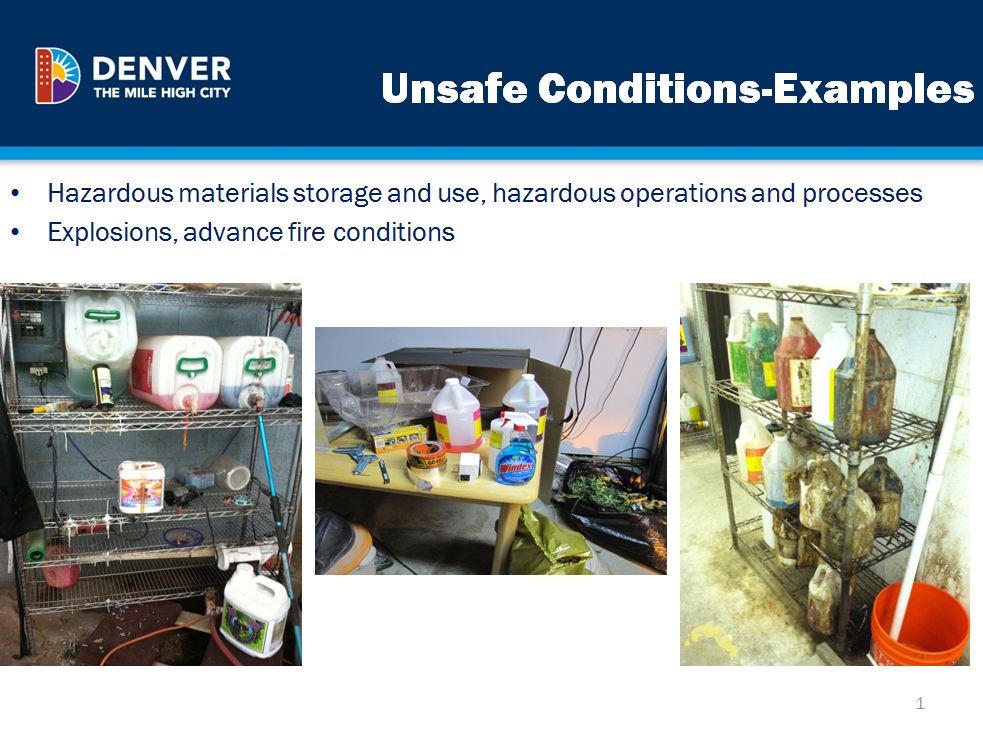 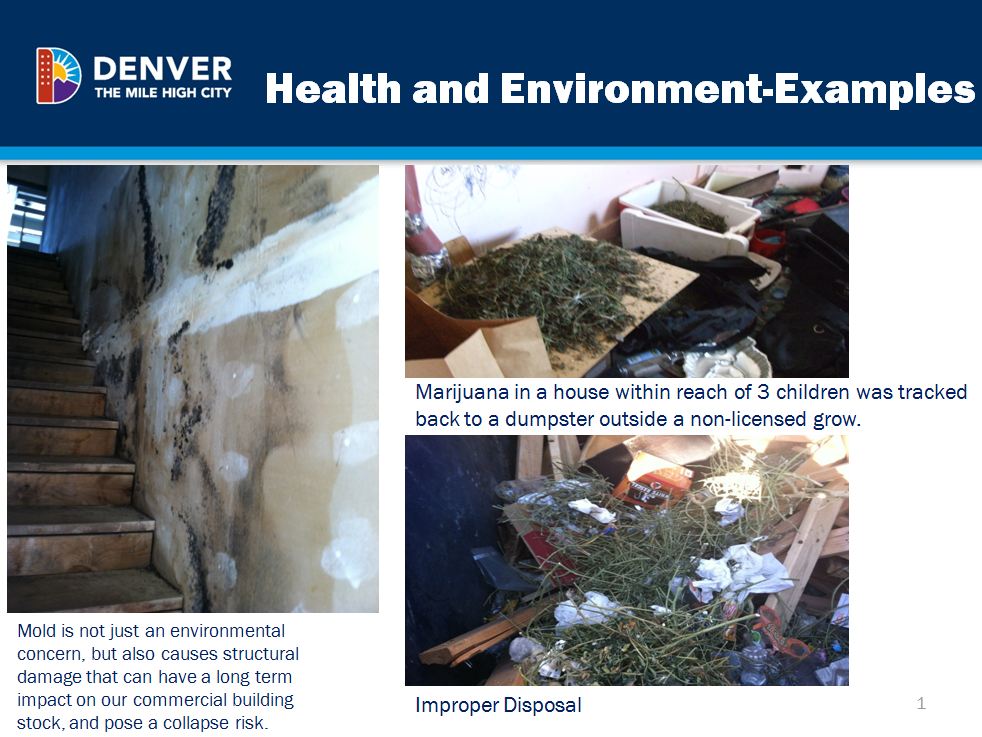 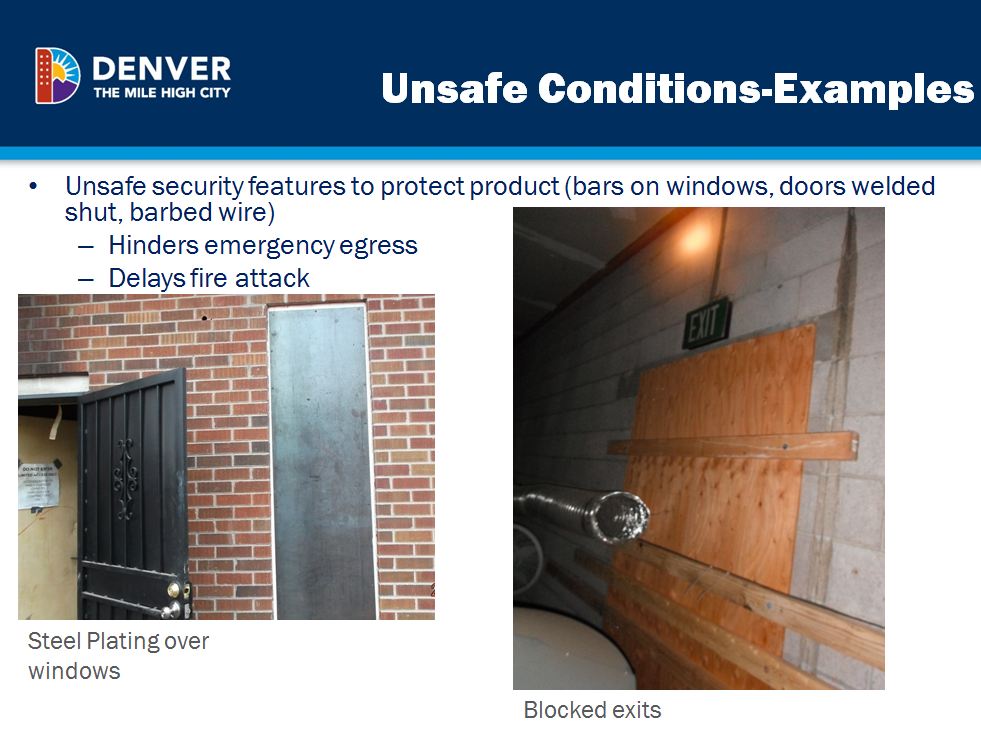 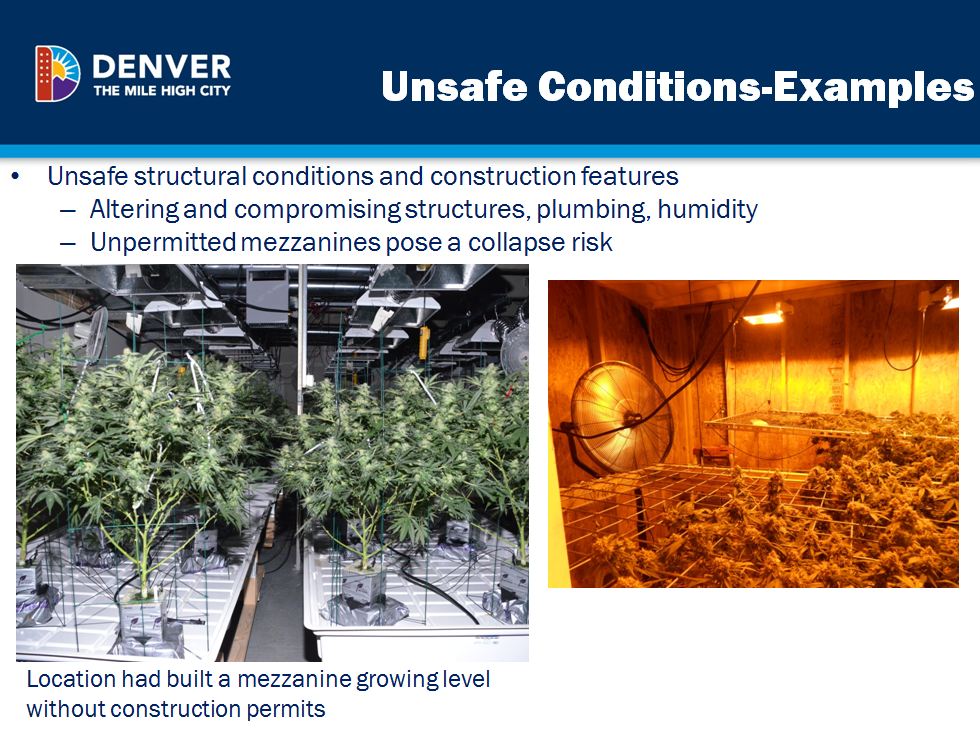