A: So far, 10 out of 102 potential dispensaries are fully licensed. Seven of those are in Montgomery, Frederick and Howard counties, and there is one each in St. Mary’s County, Allegany County and on the Eastern Shore. Their names and addresses are listed under “Licensed Dispensaries.” 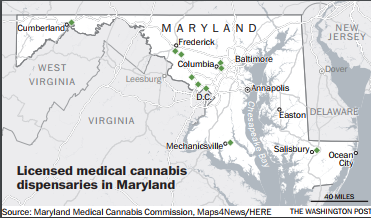 A: First, you have to register as a patient with the Maryland Medical Cannabis Commission. Then you need a certification from a doctor or other health-care provider registered with the state.

With a limited supply and a market, many dispensaries are limiting initial sales to patients who have already have registered with them.

Related: More details on how to get medical marijuana in Maryland

Q: Does medical marijuana need to be smoked?

A: In addition to the dried-leaf variety, companies have plans to process medical cannabis into a variety of other products including capsules, oils, creams, vaporizing pens and a peanut brittle-like substance called “shatter.”

Maryland law does not allow edible medical marijuana products – such as brownies, cookies and gummies – which are popular in other states.

Q: How do I find a doctor who will recommend marijuana?

A: Maryland doesn’t want unscrupulous doctors handing out phony marijuana recommendations for anyone who pays. Providers need to meet with patients in person and have a “bona fide” relationship with them before issuing certifications (which aren’t called prescriptions, for legal reasons).

The list of doctors registered to recommend marijuana isn’t public, but some are advertising their willingness.

Q: How much does medical marijuana cost?

A: It’s unclear at the moment, but dispensaries have been warning patients to expect unusually high prices in the early stages of the program.

Q: Can patients from other states purchase marijuana?

A: The law allows nonresidents to participate if they are being treated in Maryland (such as cancer patients receiving chemotherapy). But the commission is not registering out-of-state patients (a.k.a. medical marijuana reciprocity), while it reviews its policies.

It is a federal offense to transport marijuana across state lines – even to the District, Delaware and Pennsylvania, where the use of medical marijuana also is legal.

Q: What conditions qualify for treatment with cannabis?

But the regulations also have a catchall provision that allows physicians and other providers to recommend cannabis for patients if they think doing so is in the patients’ best medical interests.